*sun, coffee, cards and a blog. can you ask for any more than that on Tuesday morning? nope, I doubt it*
Every morning there's a cup of coffee
and a laptop on the corner of my kitchen table
Yes they are mine and I will know I will use it
For this morning's post or a weekend one
Sorry for my terrible lyric rewrite. I tried...that's all that matters right? Maybe today's autograph subject can give me some tips since it was his song I was attempting.
*takes a sip, before moving onto today's post*
In the late 90's, there was a group named Sugar Ray that came out with some catchy tunes such as Fly, Every Morning and Some Day. These were songs you would hear consistently on the radio and had no problem with hearing them as often as you did. At least in my case. I remember sitting in my room with the small radio listening and waiting for the songs to come on so I could time it right and record it on a cassette tape. Those times were rough and made it even more frustrating when the DJ would start talking at the end of the song.
It took a while, but I finally managed to get those three songs recorded. It may had been easier to had bought the CD at that point. Which I did later on.
When I saw that Mark McGrath, the lead singer, had an autograph in the Leaf Pop Century, I wanted to add it to my nostalgic 90's collection which brought back today's memory. So fortunately, I was lucky enough to land a copy.
*takes a sip before showing off today's card* 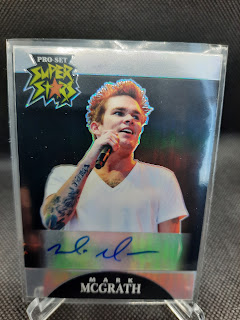 As you can tell with all of my music adds, they have been done in the Pro Set Super Stars design. I really like the look of the design as its throwback as well. 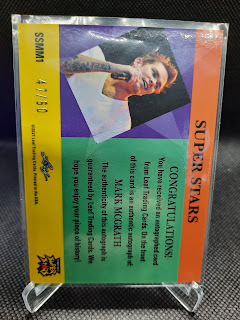 Back of the card. All of the base autographs are numbered to 60.
I was pretty stoked about adding this one to my collection.
*takes a sip before finishing up today's post*
My wife and I actually saw Sugar Ray in concert in 2003 who was there alongside Michelle Branch. My wife also a fan of their music and may have been like most girls and had a small crush on Mark. One thing I will say about their concert is that they put on a great one. If you haven't seen them yet, go check them out as they are still touring.
I must also note before finishing up today's post, Mark is also a great person with his fans. On Twitter, he actually responds to you which is where I found out he is also a fellow NY Giants fan. I hope he sees today's post and maybe even gives me a RT for other fans to see.
In comments below today, tell me your favorite Sugar Ray song.
*Coffee Card Blogger Out*
Posted by Matt at 9:18 AM