*the aroma of coffee fills the kitchen and hits me. My mouth begins to water so I dig out a mug, creamer and then fill the cup. I sit down to the computer with a stack of cards next to it which only means one thing, it's time for Cards Over Coffee*

Running a Sugar House operation is a year round job that requires a lot of attention to detail and a lot of hard physical work. 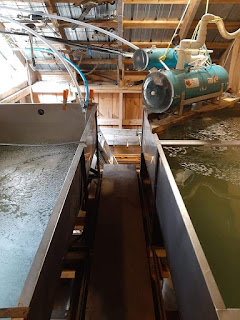 First, you go to the woods in the fall to make sure none of the sap lines, the tubing that runs from the maple trees to the sugar house. haven't been taken down by trees or animals or have any leaks from animals chewing on them. If they do, you make some minor repairs.
January through February, your time is spent doing the same thing with more in-depth repairs while also tapping the trees for sap. Tapping requires you drilling a hole in the tree and attaching the spout which is already hooked onto the tubing that you put together ahead of time. This is probably the hardest step as you are in snow shoes in 2 feet of snow some years. Best way to describe walking in 2 feet of snow is picturing yourself as one of those cartoon characters with concrete on your feet.
*takes a sip remembering the cold winter days of trudging around through the woods*
Once the tapping is accomplished, you wait until the temperatures are freezing, 32 degrees or less, at night and warm during the day,33 degrees and up, so the sap will run like it did in the two tanks pictured above. That day was a big sap run day. It's usually about mid March or so before the temps here go high enough for the sap to run. 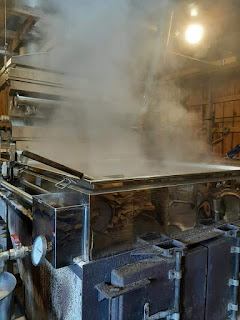 Once you have the sap, then comes the sap boiling process. The sap is drained from the two tanks into the main tank which has a fire furnace that heats up the tank and brings the sap to a boil. You need to also keep feeding the fire with wood planks to keep it going. During a sugar season, you end up using a lot of wood planks. Sometimes even all of the ones in the sugar house and more. 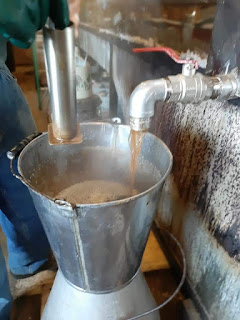 Once the sap gets to a certain temperature, you need to be keeping track of it as you go, you can draw it off as maple syrup. Then it gets filtered and packed into containers ready to sell or for your own personal use.
When the official "sugaring" season comes to a close, it's all about cleaning everything from the tanks to the tubing in the woods and pulling out the spouts from the trees. Very time consuming part of the process, but needed as everything gets corroded.
The summer months are spent cutting up wood planks and stacking the sugar house full again for the next year. Like I said, a year round job.
I am also cutting a lot of the steps down for this post or this post would literally be Syrup Over Coffee and not include any cards. Speaking of syrup over coffee, in my State a lot of sugar makers use maple syrup for sweetener in their coffee. I have tried it and am not a fan personally.
This long grueling and hard working process is what my 74 year old Father-in-Law goes through every year. Fortunately for him though, he has a big family and all of us try our best to pitch in when we can and when he needs us to.
In the hobby, it would be comparable to building a big memorabilia card set. It takes a lot of work that sometimes needs some helping hands to complete it.
This is exactly what I went through recently when building the 2020 Donruss Rookie Holiday Sweater set.
*takes a sip, continues on*
Back in the fall, which is the start of my Christmas season, I came to realize my fondness of Christmas had never really transpired over to card collecting. As fast as I realized it, the magic of the Christmas took over and I began to become obsessed with adding "Christmas Cards" to my collection. Anything with Santa like the early Pro Set ones, Topps Holiday Short Prints and parallels, Bowman Holiday, Ugly Sweater cards and even Donruss Holiday. That's when I had also discovered the 2020 Donruss Holiday Rookie Sweaters.
At first, it was fun just having the one or two I had acquired but soon I found myself adding a few more and that's when I became addicted and thought to myself that maybe a set chase was on its way.
I began to give up some fairly decent cards early on in my chase to land them through trades. I was RAK'd a few. I bought a couple. I was given a birthday eBay gift card from @CardpocalypseNC which landed me one of the last ones I needed and my sister in law even helped out. It was a complete community effort. Not to mention all of the tags on Twitter from followers knowing I was chasing this set which led me to some of my needs.
*takes a sip before the reveal*
I didn't tell too many about finally finishing up this project, I think only one person actually, so for many of you, here is the big reveal.
There are 42 cards in this memorabilia set. It's by far the biggest memorabilia card set I have ever chased and probably ever will again.
So let's check out my hard worked community efforted set, 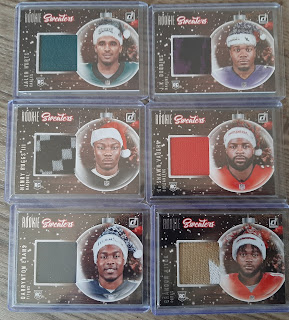 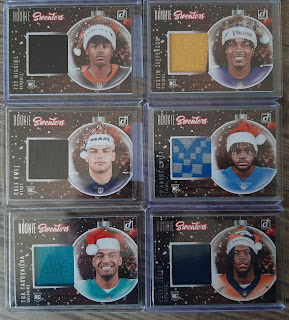 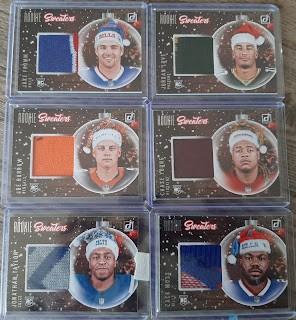 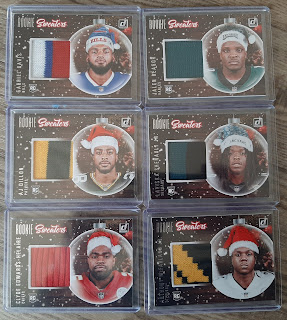 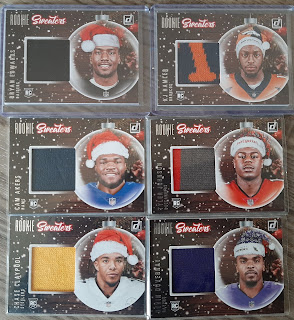 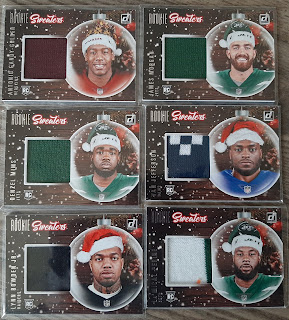 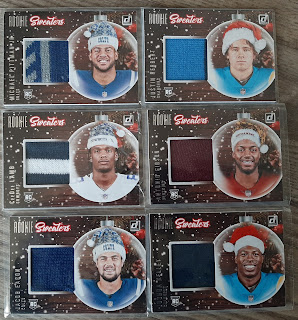 And there is all 42. The multicolored swatch ones really catch my eye the most. 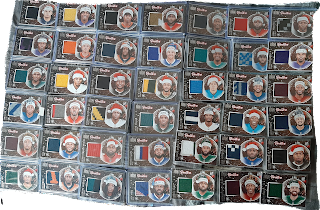 And here is all 42 cropped together. I must have been holding a mug of coffee while cropping this disastrous picture or possibly dumped some in my crotch or maybe had a lil something-something extra in my cup. Well, if I drank.
*takes another sip*
I am also working on the 2020 Donruss Rookie Sweater Dual Sweater set which I am half way done with. 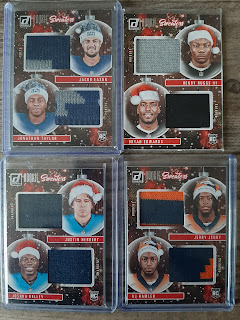 Here are four out of the eight. Fortunately I already got one of the two big ones with Justin Herbert. I think this is achievable but it may take some time. Once again, couldn't have even done this without some community help.
*takes a sip before finishing up today's post*
When everyone comes together to help, it's amazing some of the things you can accomplish. Whether its something as small as 42 card memorabilia set, something larger such as maple sugaring, or even tackling worldly issues such as hunger, when everyone does their part, you can accomplish anything.
Now time for another cup of afternoon coffee.
*coffee card blogger out*
Posted by Matt at 1:45 PM