*coffee is brewed, poured and now being sipped as today's post begins*
I have done some fun posts on here before, at least I hope you guys thought they were fun, but nothing like today's post and new series.
It's time to reveal some things about your favorite coffee card blogger. Well, I believe I am the only coffee card blogger but that doesn't mean I am still not your favorite one.
This series will hopefully answer some of your burning questions such as who is my favorite DC Comic Super Hero? Who is my favorite singer? What Is My favorite snack? Which Ice Cream Do I Enjoy The Most? Which video games do I enjoy? And other hot topics including today's topic, Who Is My Favorite Dinosaur?
*takes a sip before moving on with today's post*
I have always been mesmerized by dinosaurs since childhood. Sometimes I would "go back in time" on my bed time machine to see them. Even though they were either stuffed or those hard figures you would find at the dollar store, I would still spend a lot of my time that way. Other times I would watch dinosaur related shows/movies such as Jurassic Park, Dinosaurs, any documentary on them along with Land Of The Lost (90's version). I also believe my passion for dinosaurs is what led me to liking Mighty Morphin Power Rangers.
I know I wasn't also alone in being a dinosaur fan when I was a child, or even now as an adult, and I also know that everyone who is a fan of dinosaurs has a favorite.
Mine, well, that's easy. I like who I consider the "king of the dinosaurs" in the Tyrannosaurus Rex.
*takes a Gigantic coffee sip* 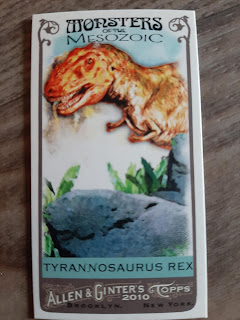 Weighing up anywhere between 4.5 to 8.4 metric tons and over 40 ft long, the T-Rex was one of the largest land carnivores of all time. I would guess along with his morning meal, his coffee consumption would be pretty intense. 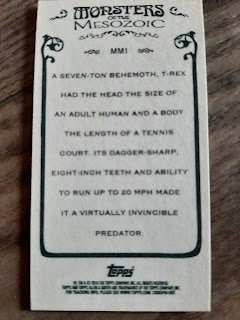 The T-Rex was also fast and could take down their prey like no other. He was pretty much invincible so whatever he wanted, he got. Sounds like a someone's ex-wife.
*takes another sip, stomach is starting to growl like a T-Rex's wondering what carnivorous breakfast I could make*
As for why I like him, he just seems like the coolest of all dinosaurs. Big, ferocious, feared, short armed (well that's the least liked feature), and just his appearance alone ranks him to the top. Also, all of his traits are the opposite of mine. I would probably be more Hippodraco, except the being small part as I am 6ft 2in. But the more quiet, wimpier type of dinosaur.
*takes a sip before closing*
I hope to hear which dinosaur and why it is your favorite. Whether you share it in comments, on your own blog (please tag this blog along with that post) or on Twitter. I am curious to hear!
*takes a sip, Coffee Card Blogger Out!*
Posted by Matt at 10:30 AM