Take What You Can Get

*yawns, sits down after a long night of not much sleep and opens up laptop. Forgets that he needed to brew a cup of coffee. Gets up, does so, sits back down and forgets the cards we are going to talk about. Gets back up, grabs the cards, sits back down and finally thinks he is ready for some Cards Over Coffee*
When it comes to sleep, you take what you can get. Some nights for me it can be four hours and other nights seven.
When it comes to coffee, the darker flavor, the better. But, sometimes finding decaf coffee isn't cheap or easy so I will take what I can get. Coffee is coffee right?
When it comes to the hobby and finding retail packs, if you see any, take what you can get. Something is better than nothing I would think.
That's how I approached my Walmart trip a few days ago.
*takes a sip of card, I mean coffee, continues on with today's post*
There wasn't too much to find down the aisle like the previous visit I had, but there was at least something. 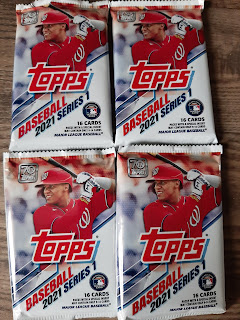 Sitting there staring at me were 4 packs of 2021 Topps Series 1, which I grabbed all of even though I already had my fair share and need of Series 1. My hope was that I would have one of those miracle stories to tell of a big Trout autograph pull. 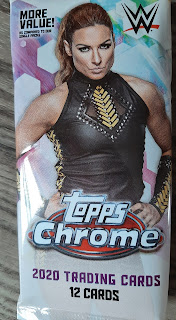 Also there was a pack of 2020 Topps Chrome WWE that I passed by a few times because it wasn't something I directly collected. I did watch some wrestling in the early 2000's and did find a few guys I liked, but it wasn't something that stuck with me to watch. But I have always stuck by Chrome regardless and have a buddy who would appreciate them in trade. So after some debate, the pack "fell" into my cart. At least that's how I explained it to my wife when she rang it up.
That also cleared the shelf. Hope that doesn't make me a bad guy. I promise I didn't take pictures of my cart with the five packs of shelf clearing I did and tweeted it out.
Maybe I should have. Brag photos seem to get a lot of attention.
*takes a sip, wondering if the pack of WWE Chrome should have gone back on the shelf but then figures someone else would have just flipped it so might as well enjoy the rip*
I opened up Series 1 first, not expecting very much. 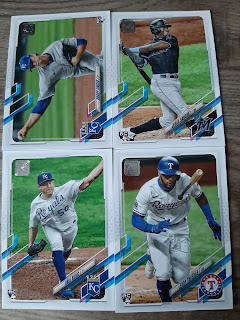 The rookies I found 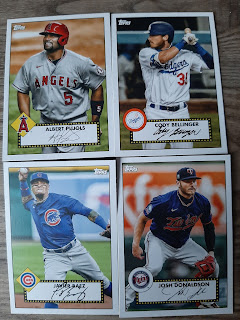 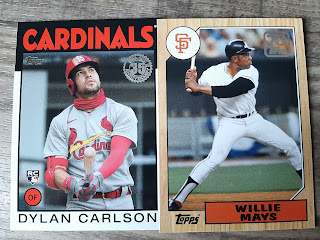 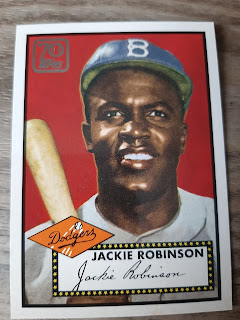 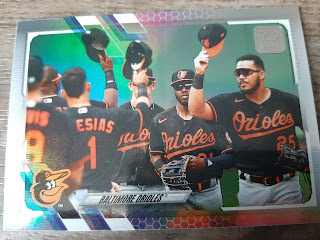 And a rainbow foil team card of the Orioles.
Nothing crazy in those four packs and not anything for my PC but it was still fun to open.
*takes a sip to stay awake, begins to rip zzzzzzzzzzzzzzz the pack* 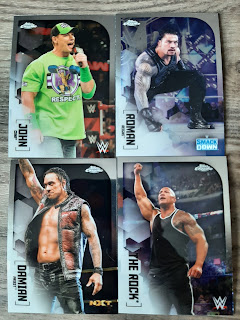 Not a bad start here for the first four cards. I know Cena, Roman and my wife knows The Rock. Well she knows him as Dwayne Johnson in many of the movies she likes. I simply call him her husband. 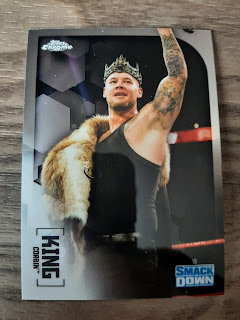 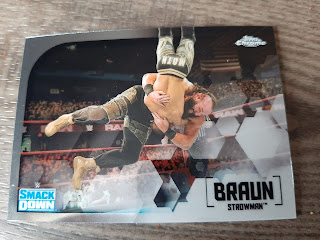 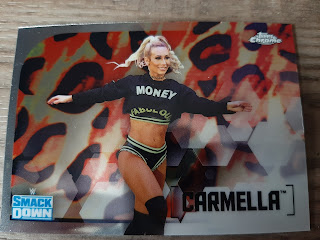 The next three cards I had no idea who they were though the Carmella is cool because of the background. I bet that would make a great looking refractor.
The next card, 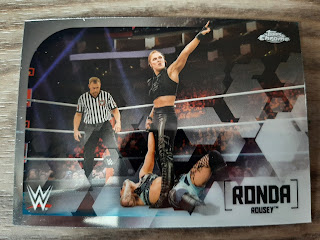 I knew. I think everyone probably knows who Ronda is. 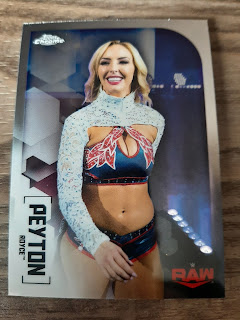 And the final base card was someone I didn't know, but wasn't a bad ending to the base. Yes folks, that was a male comment.
Now onto the shiny finds.
*takes a sip before moving on* 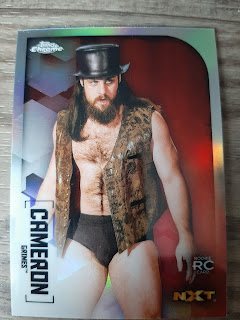 Rookie refractor of Cameron Grines. I like rookies and refractors so maybe this will be a PC card. 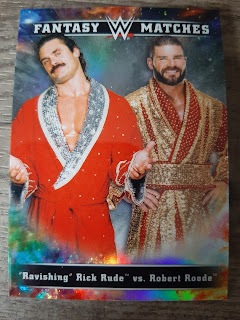 Fantasy Matches. I don't know either of these guys, it shows you how much wrestling I have ever watched. 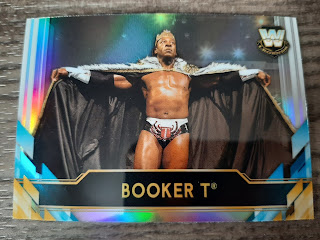 And to end it, Booker T. A name I knew at least.
Well, the Chrome was a fun rip with some names I knew. There were a couple cards I will keep but hoping my wrestling trader buddies will need the rest.
*yawns then takes a sip before closing up today's post*
I am not sure if next time I would take what I could get, but who knows. It may depend on how desperate I am to open something new or maybe next time I would think more about specific cards I would want for my collection instead which is always the smarter but least exciting choice.
*Coffee Card Blogger In...I mean Out. Time for a nap.*
Posted by Matt at 4:00 AM