*sits down with cup of coffee in hand. There is nothing better than some afternoon sunshine and some coffee. It's time for Cards Over Coffee*
It's Mother's Day. A day for all of the mom's out there to be celebrated for bringing us into this world and putting up with us. That's the best way to put it.
My mother never really had to do much "putting up" with me. I was always the good kid. I got my homework done with solid grades, I respected my parents, elders and teachers. I always did my chores when asked. But, that didn't mean I didn't have my downfalls occasionally. I said I was a good kid, not a perfect one. So when those moments came, my mother was the disciplinary one in the household and to put it easy, when you were disciplined as a 80's and 90's child, you didn't get a timeout chair to think about what you did as you knew what you did. By remembering what you did, you also remember the dire consequences so you wouldn't do it again. It also gave you more respect/discipline for those of higher authority something I think we lack in today's society.
But, it's not just the disciplinary moments I remember about growing up with my mother. I remember getting up early on school mornings and sitting with her at the kitchen table having coffee, no surprise there, and playing the card game of war before I had to get ready for school. Then when I came home from school, she waited to watch a couple of cartoons with me before she would make supper and I would go outside and play. I also remember when I asked my father for money for the school book fairs and being turned down, she would slip me a $5 just so I could get the latest Goosebumps.
What I remember most though, was the hobby she despised but came around to later on.
*takes a sip, wishes he was playing war while doing so*
When my father and I first go into card collecting, my mother accepted it. But, as the 90's rolled on, it started to get to her. The stacks of cards, the money being spent, the Becketts on the kitchen table, the non stop discussions between my father and I of products and players was really eating at her. It got to her so much, that she basically forbid us to collect and add anymore cards into the house. (picture a dictator ruling over your household)
What she didn't realize was that the hobby was like a Lay's potato chip, once you have one, you can't stop.
So my father and I had to become creative. Card shows and LCS visits "became" visits with my grandmother. Packs of cards to open were snuck in all forms of clothing though wearing a winter coat in the summer didn't last too long. Discussions about cards became notes back and forth, we didn't have texting then. We found a way to keep collecting though occasionally we were caught and sometimes even frisked for cards after she found some empty wrappers in my father's pocket once after washing it. Oooops.
This went on for many years until we finally found a way out. That way out came in the form of a Dallas Cowboys running back named Emmitt Smith.
*takes a sip, well two honestly. Starts typing up a text while also trying to move on with today's post*
As most know, I am a HUGE (emphasis on this word like Donald Trump would say it) New York Giants fan like my father. What I haven't mentioned was how big of a Dallas Cowboys fan my mother was which made for some interesting Sunday and Monday night games.
One day, I mistakenly left some Dallas Cowboy cards out on the kitchen table and on top of the stack was an Emmitt Smith, my mother's favorite Cowboy. I am not sure if it was fate, but whatever it was that day changed our card collecting future when my mother found them on the table.
*continues the text, takes a sip, comes back to typing*
That one Emmitt Smith card got my mother interested in collecting to a certain extent and it opened up our doors some as well as long as we gave her the occasional Emmitt for a "hobby payment" for our collecting.
We had her all set up with a binder, pages, penny sleeves and top loaders and she took care of her Emmitt's and still has a few to this day actually. But, most are long gone after many moves and moments of needing money.
So when I see an Emmitt Smith card, my memory is refreshed from that time. Especially when I see one around Mothers Day.
In my huge Christmas mailing from my buddy Wes, he included a solid stack of the Hall Of Fame running back that took me back and that I had to share with you guys today. 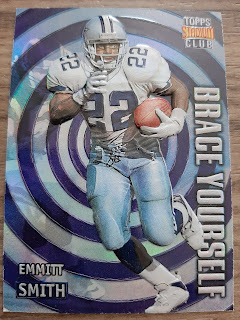 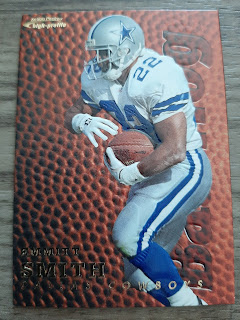 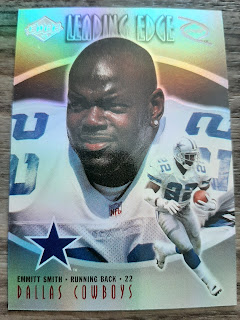 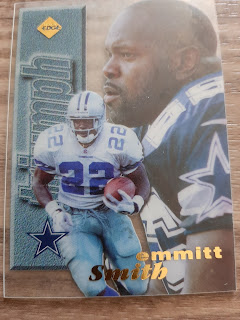 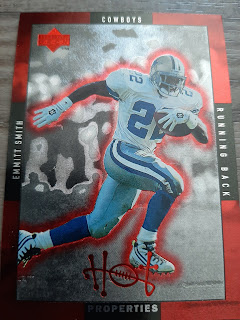 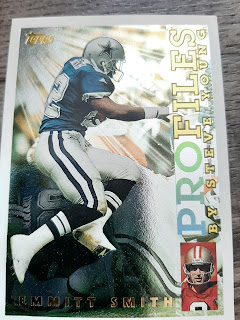 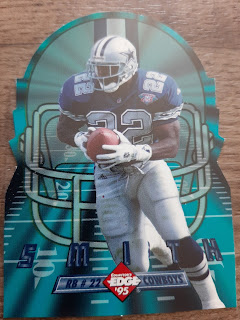 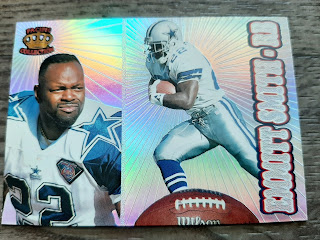 Many of these bring me back, though I don't think she owned any of these.
Maybe I should send her a "Mother's Day Card".
*takes a sip before finishing up today's post and finally finished typing up my text to send my mother for Mother's Day*
I hope all of you have a memory with your mother and collecting. Just hopefully not the one where she threw out your cards. Those are more nightmares than memories.
Happy Mother's Day to all of the moms reading this today and to all of the mom's of the readers. If you have any collecting memories with your mother, would love to read it below.
*Coffee Card Blogger Out*
Posted by Matt at 1:00 PM