May The 4th Be Late With You

*finally able to sit down and write a post meant for 2 days ago. Takes fresh cup of coffee and sits it next to the laptop and stack of cards. Trying not to tip any of them over. It's finally time now for some new Cards Over Coffee*
It's been a busy week so I am running a few days behind on the National Holiday on May 4th known as Star Wars Day.
*takes a sip, coffee hits the spot*
Star Wars didn't exist in my life until much later in the 90's which is a lot later than it was for most people around me. I first discovered the movies on TV and really got into watching them. I saw each of the three original movies (I still refer to those movies as the originals) a few times and was pretty excited about hearing there was a new one coming out in 1999. Then I found it was a prequel, I can't stand prequels for any movies, so the newfound excitement of another Star Wars movie sailed away.
However, I still gave the prequel and following prequel episodes a chance and found out that I was right that they were awful. Nothing, I mean nothing ever beats the originals. I will say though, I did grow to liking Darth Maul.
*takes another sip. Feels his tummy rumbling*
Fast forward to now, Disney is in control of the Star Wars universe and there are more movies, cartoons and TV shows about the franchise more than ever before. I am not sure if that's a good or bad thing, but seems many die hard fans are pretty happy with it.
For me though, I will just stick to the three originals because I am too old school.
When it comes to cards though, I will take them all for my non sport collection.
*another sip leads to an idea of what to eat for breakfast...okay mid morning snack you caught me*
Most of my Star Wars card collection has been acquired through trading, which is how a lot of my collecting is acquired. 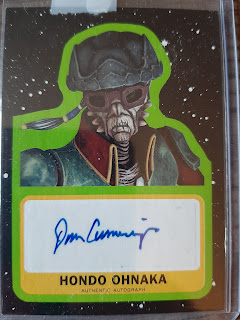 Actually, I am pretty sure all with the exception of this card was picked up through trading.
Hondo Ohnaka is not a character I know, but the voice actor I know plenty about and many of you should as well. Jim Cummings is Darkwing Duck, Tigger, Winnie The Pooh, Pete from Goof Troop, and about a million other cartoons from yesterday and today. This autograph was a must have for me so I forked out the $12 a couple of years ago to make it happen.
I felt I got a steal on it comparing the cost to other autographs of his.
The rest of these cards for today's post have been recently posted on here, but I am sure a second look won't be frowned upon. 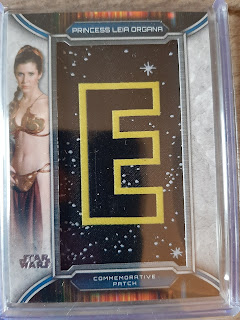 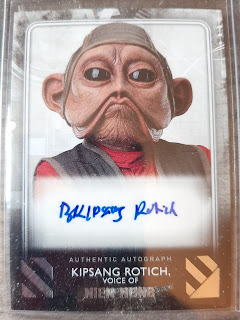 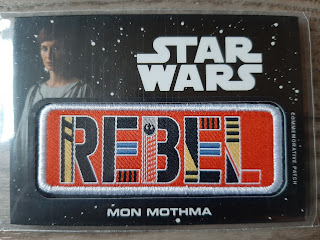 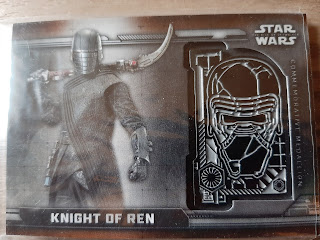 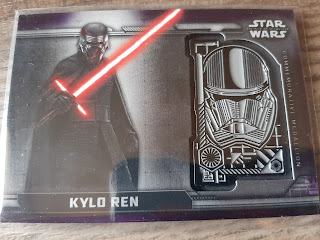 I also have two Film Cel relics from the original movies I couldn't find for today's post. Those are my two favorite cards in my Star Wars collection and will need to be shared. Maybe I will wait a year from now and show those two off for next years Star Wars day.
*takes another sip*
I also thought since this is a coffee card blog and today we are talking Star Wars that it would be fun to rename a few of the characters.
Here they are,
Darth Coffee
Brewbacca
Han Expresso
Java The Hutt
Kylo Roast
Obi Wan Cappuccino
R2-Cup 2
R2-Dcaf
If you have anymore or ones to compete with mine, I would love to hear them in comments.
*takes a sip before finishing up the post*
I hope every had a Happy Star Wars Day! Also let me know your favorite movie from the Saga in comments!
*finds a couple of Oreos, takes the cookie side off to eat first and saves the frosted side for last. Takes a a sip of coffee, then dives on in for the frosted side. Coffee Card blogger out*
Posted by Matt at 2:30 PM