*it's time for some cards, coffee and a whole lot of yada yada yada*
2020 was a difficult year for everyone as we had to deal with a pandemic, cataclysmic natural disasters, Godzilla, King Kong, Space Aliens and everything in-between. It was a year we will never forget.
I spent most of last year secluded at home unless I had to make a toilet paper run, yes that's a joke, reminiscing of better times and most of those memories brought me back to the 90's.
Oh the 90s, how I miss those times.
*takes a sip thinking back to when  a cup of coffee in the 90's would be enjoyed with mom or grandma*
One of the things that really heightened my 90's nostalgia was turning on some of the sitcoms from that era. I have been watching Everybody Loves Raymond, King Of Queens, That 70's Show (later 90's), Rosanne, Home Improvement, Friends, and one I never thought I would watch...Seinfeld.
*takes a sip*
Seinfeld, I would say, was probably one of the most liked comedies of the 90's-if not all-time. When it made its run in the 90's, I really didn't get the humor or why anyone could like it. I despised the show to its core and anyone who liked it. It's all I heard about, especially when the finale aired.
But, since 2020 was such a different year, I would give it a shot again and began to DVR the episodes. After watching a few, I found out what I had been missing out on pretty quickly.
Not only did I start to relate real life to some of the episodes, but it also gave me a look back at some nostalgic items. 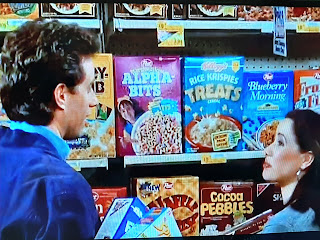 Take this episode where Jerry meets a woman with similar interests of his. They both go to a grocery store together and I could immediately put myself there with them looking at the cereal options. One of my favorite cereals to eat was Rice Krispies Treats cereal. To be honest, was actually able to enjoy this treaty breakfast up until a few years ago when they must have pulled it from the market. I also spied and enjoyed Blueberry Morning before they changed the recipe and Waffle Crisp as well.
Seeing those brought me back to eating a bowl and watching Saturday Morning cartoons. Good times, good times.
*takes a sip begins to get to the card portion of today's cards over coffee post*
As my affection towards watching Seinfeld grew, I decided to turn to eBay to see if there was any cards from the show.
Surprisingly, no sets were made, but I did find a few custom cards and a couple of cards that Topps included in sets. I, of course, had to have them.
The first two cards came from 2019 Topps Garbage Pail Kids We Hate The 90's. 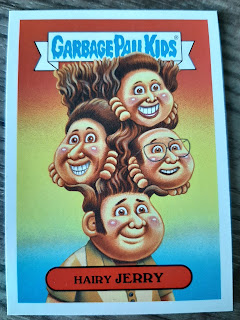 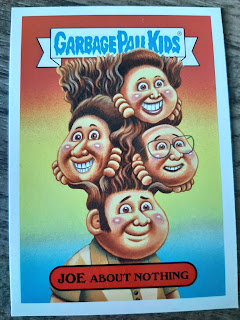 I found both variations on eBay but found them much cheaper on Burbank Sportcards Beckett Marketplace. I also saved 10% by using code 15Burbank at checkout. I suggest you try it out.
My next card was a tad more expensive, but I had some leftover birthday eBay gift card money and forked out the $10 to land it. 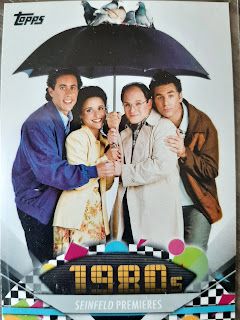 This card must be a short print as I don't see many listed. It's from 2011 Topps American Pie. 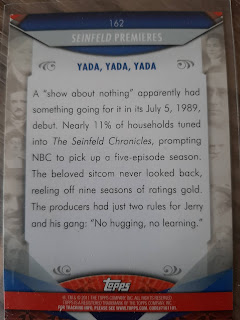 Back of card. I guess I didn't know that Seinfeld premiered in '89 as I thought it was strictly in the 90's. You learn something new everyday.
*takes a sip before finishing up today's post about nothing
I was disappointed by the amount of card love for Seinfeld as many other less popular shows landed on cardboard. Maybe someday, Leaf who does a lot of non sport cards will find a way to create a set specific for the show. I hope they capture both main characters and as many of the oddball ones they can. I do know they have an autograph of Larry Thomas who played the Soup Nazi on the show. That one is on my list.
If you were to ask me which Seinfeld episode I liked the best, I have an answer for you. I like them all equally. However, my favorite characters are George and Kramer as I am a little bit of both.
In comments, tell me your favorite 90's sitcom, your favorite Seinfeld episode, and your favorite 90's cereal that may not exist anymore.
*Coffee Card Blogger Out*
Posted by Matt at 3:00 AM