*coffee ready, internet actually working, so it's time for a new post on Cards Over Coffee*
In the 90's, the NY Knicks meant as much to me as any team that I followed. In the mid 2000's, I lost interest and apparently just in time as they became an embarrassment of a franchise. Legendary names I watched such as Patrick Ewing, Allan Houston, John Starks, Charles Oakley, Larry Johnson turned into whomever was at the end of their career or those who would be last picked in a dodgeball game that nobody else wanted.
It was a sad,sad time for the Knickerbockers. I would say it's the equivalent of leaving your hot coffee out too long.
Fast forward to last year, the rise of the hobby and basketball cards got me hooked again.
*takes a sip*
At first I started a small collection of RJ Barrett, the Knicks top pick from last year, and watched a couple of games. From there, I started a bigger collection of 100+ cards of Allan Houston who was my favorite Knick of the 90's. From there, I grabbed a few autographs for my collection of a couple other Knicks like Kurt Thomas and Patrick Ewing Jr. I still need a Sr autograph.
This year, the Knicks are playoff bound for the first time since 2013 and Game 1 for them kicks off tonight against the Atlanta Hawks at 7pm. They are led by Coach Tom Thibodeau who has appeared to turn the franchise around.
I thought it was a bad hiring when I had heard about it, but I was wrong.
*takes a sip and shakes head. Hope wife doesn't find out the admission of I was wrong*
The Knicks are led by a tough defense and a bench that can score as much if not more than the starters. A couple of those bench players were rookies the Knicks drafted in the 2020 NBA Draft that caught my eye and my collection this year. 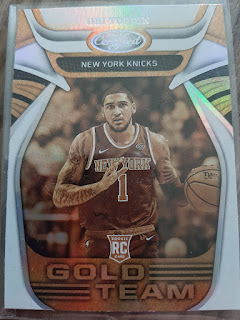 Obi Toppin was picked in the first round, 8th overall by the Knicks. He struggled most of the season but has shown some bright spots as of late. He averaged 4.1 points, 11 minutes a game in the regular season. 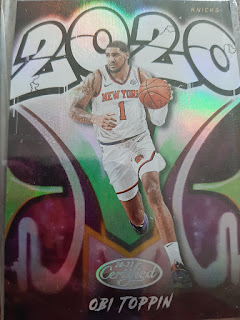 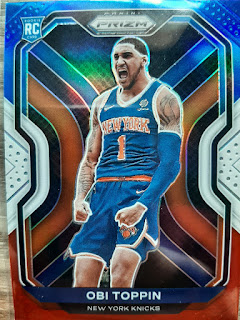 It will be interesting to see how much playing time in the playoffs this raw rookie gets.
Someone who didn't look raw was Immanuel Quickley who was drafted by Thunder at the 25th overall spot but traded to the Knicks for their 23rd spot pick and others in a package deal.
I like this move. 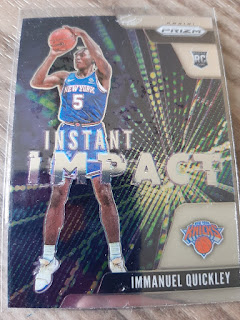 Immanuel, Quickley impressed the Knicks with his shooting and deep ball. He averaged 19 minutes and 11.4 points a game. 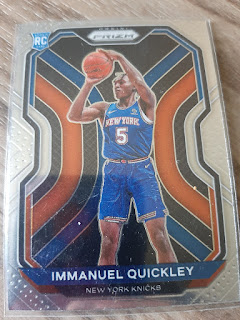 I expect Immanuel to get plenty of time tonight and showcase his skills in a big game.
*takes a sip before closing up today's post*
This season I was only able to watch one game as the Knicks aren't on TV like they used to be in the 90's. Which you really can't blame them looking at the last few years. I hope to watch as much Knicks playoff basketball as I can. I will probably have a cup of brew ready as well for it.
LET'S GO KNICKS!!!
*Coffee Card Blogger out!*
Posted by Matt at 7:30 AM