*even though yesterday was 80's On The 8th, I still forgot that today I would need a 90's card. Grabbed the quickest one I could get to, takes a picture, emails it, downloads it, uploads it. Brews some coffee and is ready to go. Time for some Cards Over Coffee*

Today I take you back to 1995, which I consider my first real year in the hobby despite collecting since 1993. It was also the beginning of a 5 year period which put out the best cards in the history of the hobby. If you don't agree, you're wrong......at least in my opinion.

Whether it was base or inserts, there was plenty eye appeal to go around.

Today's card was one of those that had plenty of eye appeal. I acquired it in a Twitter trade with @MaxxPower68 recently.

*takes a sip before continuing on*
1995 Playoff Unsung Heroes fell in random packs of Absolute. 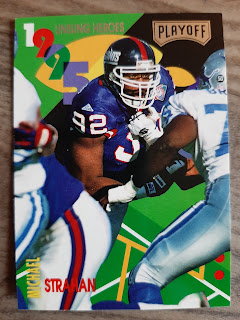 I own other years of Unsung Heroes but none of the 1995 version until now. The front of the card sums up 90's funk on cards with its bold colors and fun designs. 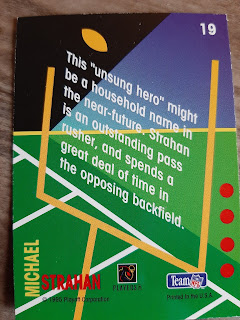 On the back, is the design of the front minus the player.
The person who put the write up on the back of the card should be praised. They absolutely nailed Michael's future.
There are 28 cards overall in the full set with Michael being card 19.
*takes a sip before finishing up*
This is a fun card design, but it's not quite shiny enough to keep my attention of a full set chase. I am glad just to have the one Giant in the card set.
*thinking of more stuff I should add to these flashbacks of the 90's, Coffee Card Blogger Out*
Posted by Matt at 3:00 AM