*sits down and realizes what day of the month it is, it's the 8th and that only means one thing...it's time for 80's on the 8th! Time to get the coffee ready and sit down for some Cards Over Coffee*
Today's item is not a card, but a sticker of the greatest Linebacker, if not greatest defensive player of all time, the great Lawrence Taylor.
Taylor was the NFL MVP in 1986, won two Super Bowls, 8x First Team All Pro, went to 10x Pro Bowls and had 132.5 sacks in his career. If that resume doesn't put you at the top, which one will?
I got to watch Taylor once in person at the old Giants Stadium at the ripe age of 10. At that point in my life, I didn't understand football as sports wasn't really in my blood yet. I wished it had been. At least I can say I watched him once.
When it comes to collecting Taylor, since I didn't really get to watch him a lot, I don't focus a lot on his cards. But, when the opportunity strikes, I will take 'em.
Which is how I landed the sticker featured in today's post that I acquired in a Twitter trade with @MaxxPower68.
*takes a sip before showing it off* 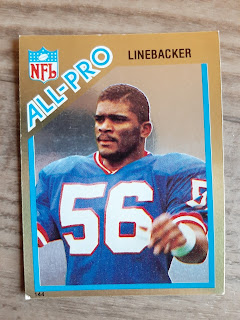 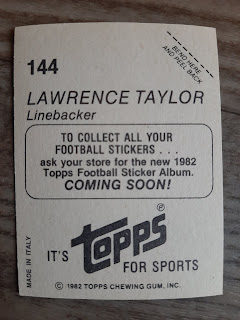 In 1982, Topps inserted these Coming Soon stickers in packs randomly. There were 16 total stickers to collect in the preview set. Thanks Fuji for the information.
The Lawrence is from his rookie year and a few other players of note in this set include, Dan Fouts, Ken Anderson, Jack Lambert and Billy Sims.
*takes a sip before finishing up*
This sticker will go well with my actual rookie card of Taylor I traded for years ago.
*trying to figure out how to further this post from the 80's, stay tuned on that. For now, Coffee Card Blogger Out*
Posted by Matt at 3:00 AM