*going to be fun today, it's been awhile since I have done with one of these posts. So let's get on with a trip back to the 90's with a box break. But first, let me get some coffee*
Long before the rise of box prices in the hobby, I was able to make a trade with my buddy @ShaneSalmonson and land a few boxes to open of 90's stuff I enjoy. These box breaks happened such a long time ago, not just because they are in the 90's, that I no longer have the odds information to offer you. I apologize in advance for that.
Knowing this break already has been ripped instead of being ripped "live" on here, there won't be any sippin' before I do some rippin'.
*takes a sip, begins to show off the break. This doesn't sound as much fun* 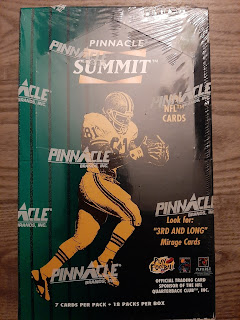 In each box of 1996 Summit football, there were 18 packs of 7 cards each. The box back then was around $30. Now I don't even want to look and see what they are going for. 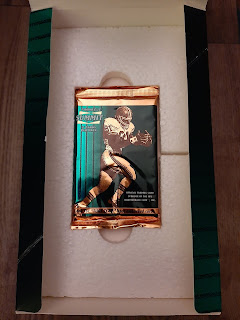 When you open up the box, the stack of packs stare at you in a nicely centered Styrofoam. Back in the 90's, Summit was considered to be a "higher end" product so it was packed like so.
*takes a sip before breaking down the product more and showing off the results* 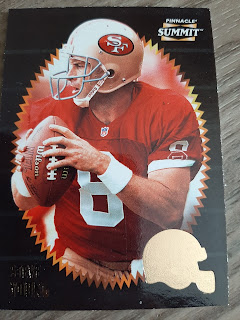 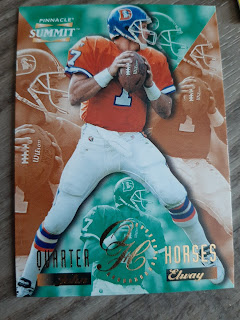 This breaks down to 146 veterans, 35 rookies, four checklists, and a 15-card subset all about quarterbacks in Quarter Horses. 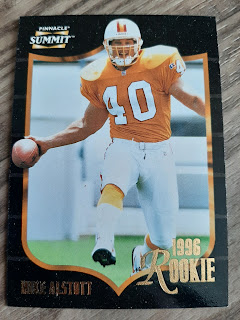 The 35 rookies are from a strong class that include such stars as Keyshawn Johnson, Marvin Harrison, Kevin Hardy, Simeon Rice, and Eddie George.
*takes another sip, looks around for a breakfast item since posts like this usually take awhile before I will hit publish. Finds a Jalapeño cheddar bagel, toasts it, butters it, comes back to the laptop. Notices beverage is getting low, gets back up, brews a cup, comes back to sit to move onto the inserts*
One great thing about breaking 90's cards, you aren't concerned about hits. It's all about the beautiful inserts and parallels.
The parallels in 1996 Summit are the same as the 1995 edition in Ground Zero. Difference being, the 1995 is more of a speckled design and the 1996 is more of a zebra color. Both though, look striking. 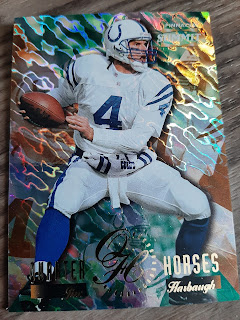 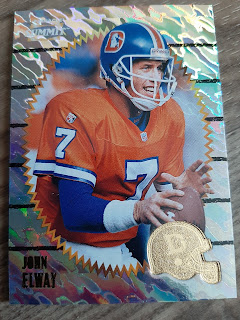 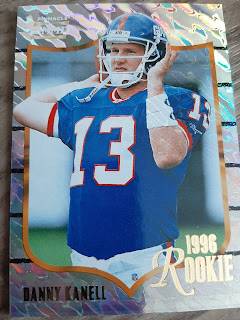 Danny Kanell. This is a nice PC piece.
*takes a sip before moving onto the insert finds* 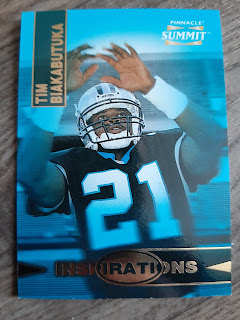 Inspirations is a rookie laden insert set with all cards being numbered to 8000. I pulled one of the guys who has a fun last name to pronounce and a guy I pulled a lot of in the 90's. 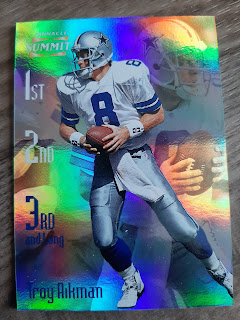 3rd And Long. These look really great and are numbered to 2000 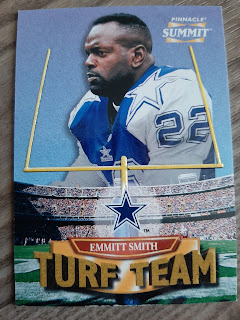 And Turf Team. This card I missed when opening up packs but after sorting found it stuck to the back of another card. These are numbered to 4000.
*takes another sip before finishing up today's post. Also finishes last few bites of bagel*
This was a fantastic break. Emmitt, Elway and Aikman inserts and parallels. I got a good chunk of the base set and was already chasing the Ground Zeros and all three pulled were new. Very happy with the results from this break.
Let me know your thoughts in comments.
*takes one final sip, heads back for cup #2. Coffee Card Blogger Out*
Posted by Matt at 8:43 AM