*sits down for a late morning brew. Grabs laptop and sits down with a fresh cup of joe. The sun is finally out for the first time this week but with all the rain the grass is finally green. Coffee, cards and laptop ready, its time for some Cards Over Coffee*

I have been collecting non sport cards for a few years now and the further I get into them, the more and more I am enjoying it. At this point in my collecting, I would rank Non Sport Cards #2 just behind football card collecting.

My recent pickups from Burbank Sportcards Beckett Marketplace, where I saved 10% off my order by using 15Burbank at checkout, was loaded with non sport adds specifically from one product.

That one product, is 2011 Topps American Pie. The base set features 200 cards loaded with pop culture and related moments in history. The inserts are fun and the hits include history and landmarks.

In this NEW series, I will walk you through every card I grabbed from this set and show them off.

*takes a sip, begins with the first card that was added* 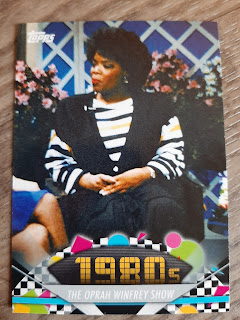 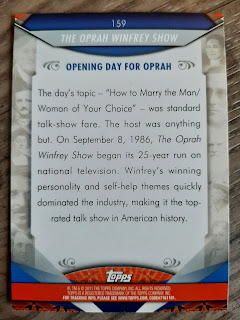 Card #159 in the set is The Oprah Winfrey Show.
Oprah, as some people shorten the shows name, was an American daytime syndicated talk show that aired nationally for 25 seasons from September 8, 1986, to May 25, 2011. The show focused on education, featuring book clubs, interviews, self-improvement segments, and looks at worldly issues. It remains one of the longest running talk shows in TV history and received 47 Daytime Emmy Awards.
I don't think I have ever watched Oprah, but I did watch plenty of Daytime talk shows with my grandmother growing up. Favorites such as Ricki Lake, Maury, Live With Regis and Kathie Lee, and Sally. I will admit that I did watch one myself in The Rosie O'Donnell Show which I enjoyed because of her upbeat craziness on the show.
*takes a sip before closing*
Oprah set a bar so high for Daytime Talk Shows that I don't think will ever be reached again. It does make me wonder though how she found a big enough trophy shelf for all of those Daytime Emmy awards and other accolades she has won over the years. I barely can fit 10 coffee mugs in my cupboard.
*coffee card blogger out*
Posted by Matt at 3:00 AM