*takes a sip of fresh brew, smiles, feeling great the way the week started*
This has been a great start to the week. First, I got an email saying my next shipment from Burbank Sport Cards Beckett Marketplace has shipped. I can't wait to show that off. Then I was chosen for a couple surprise mail days from my Monday RAK thread on Twitter and yesterday..... 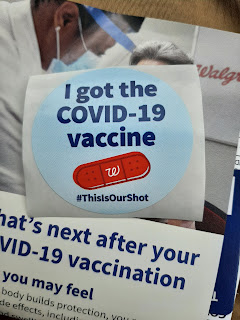 I went into Walgreens to pick up a prescription and walked out with my first shot of Pfizer Covid Vaccine. How does that work, you may ask? Well after walking back to the pharmacy, I saw a sign that said Covid Vaccines were now available so even though I was scheduled for one on Saturday, I checked in and they had an appointment right then and there so I took it. I didn't blink an eye or think twice about doing so.
I know it's only the first shot, but it felt like a huge weight lifted off my shoulders when I walked out of Walgreens. And today, I have a minor sore shoulder from the shot, but overall, I feel great. My mood has changed as well. I can't wait until the second shot is done in three weeks so the overall worry weight will be completely lifted. The second shot is the one that gets you.
*lifts the mug and is thankful to be right handed since the left arm is where the shot was given. Takes a sip, then continues on*
Another thing that made this a great start to the week was a surprise in the mail from @JohnHollod. I knew something was coming, but had no idea what it was.
When I opened it though, I was amazed.
*takes a sip before the reveal*
I have been a long time follower of Johns and really enjoy seeing his Super Collection of Paul O'Neill that he tweets a new card of on a daily basis. John and I also have a common ground in love of 90's inserts.
So I wasn't a bit surprised when I saw a few in this package. It also was no surprise to find them as Yankees either since he is a fan like myself.
*takes another sip*
The first card I found was this 2000 Upper Deck Yankees Legends Pride Of The Pinstripes. 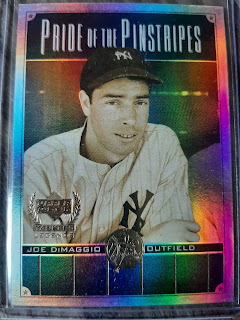 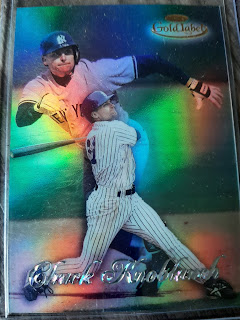 Up next, Topps Gold Label. This product pleases your eyes and makes you appreciate what the 90's brought. 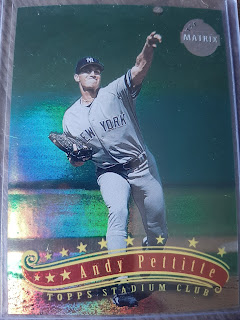 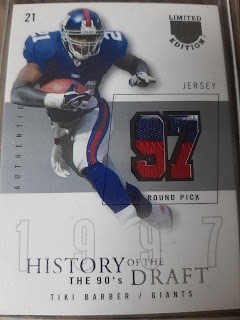 This Tiki Barber was a card that John spotted in a Twitter stack sale and knew that I would enjoy so he grabbed it. He wasn't wrong, this is one of the coolest Tiki Barber cards I own. 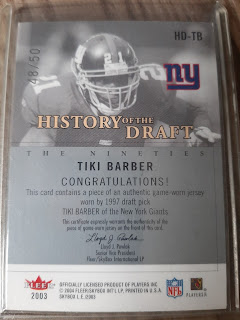 It's also numbered to 50 and guess what, game worn. Remember those days? I do.
Thank you John for this nice surprise. I really appreciate our friendship and of course our passion for 90's cards.
*takes a sip before finishing up today's post*
I am hopeful that rest of the week goes as well as the first two days have. If not, I can always turn to extra coffee. That's my version of alcohol since I don't drink.
*finishes up cup, Coffee Card Blogger out!*
Posted by Matt at 6:00 AM