Music To My Ears

*sits down for the early morning cup of coffee, grabs laptop, turns it on and fires it up. It's time for a new #CardsOverCoffee*

Today is kind of a piggyback off from yesterday's post where I discussed how during the pandemic I have learned to appreciate the little things both in life and in the hobby.
Another thing I took for granted is music.
I, just like everyone else in the world, love music. Music soothes the soul and can take you places. Certain songs can take you back in time, bring back warm memories, and work really well for a calming center point during a pandemic.
I felt the impact of music over the past year and how much I took it for granted before. Certain songs I have played over the past year brought me such joy and memories in my life that made me laugh and sometimes even tear up. Yes, men can admit that they cry.
Over the past year I have played music on the way to run errands, while I sort cards, while I worked out on the treadmill and even while I blog. Yup, I am jamming right now as I type and enjoy this mornings cup of coffee. Music is simply needed in my life.
What I didn't know was that MusiCards were also needed in my life.
*takes a sip*
If you were to ask me over a year ago if I had any interest in collecting music related cardboard, I would have said no way. Though I saw many forms of them across the blogging world especially the MusiCards. But, that all changed recently when I saw a few posts on Twitter about them so I sought out the checklist.
When I saw that some of the checklist consisted of musicians I had spent the past year listening to, I needed the cards.
That's when I posted my need on my Friday Twitter "I Need" thread. This thread is specifically is aimed at specific cards that you need and others can try to trade, sell, or RAK you them. You're technically supposed to put a specific card but instead I put any and all of the MusiCards. That's when @jrl1828x8 saw my cry for help and assisted.
He not only sent along the musicians that I wanted, but also sent me an almost complete set just out of kindness!!!!
Lets check out some of my favorites in the set.
*takes a sip, flips through a few cards to upload and begins to type* 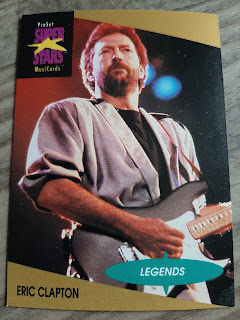 Eric Clapton has had a ton of hits, but none hit me harder than Tears In Heaven and Change The World. I can't explain my love of both songs but Tears In Heaven I am sure hits everyone in the feels. 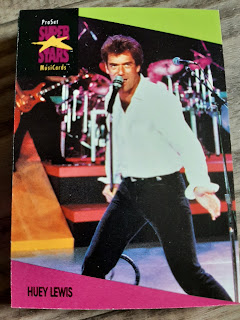 One singer I have listened to the most during the pandemic is Huey Lewis. Not only does he have some of the greatest music videos ever, but his tunes are catchy. The Power Of Love, Stuck With You and Doing It All For My Baby are some of my favorites.
The sad news about Lewis I found out this year was that he is suffering from Meniere's Disease which sounds pretty awful because it consists of Vertigo, Hearing Loss and ringing in the ears. Which forced him to cancel all of his tours and possibly made it so he wouldn't be able to sing again. 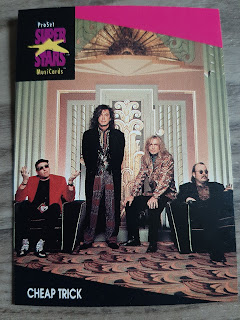 Cheap Trick had many hits as well but my favorite is The Flame. Such a great tune. 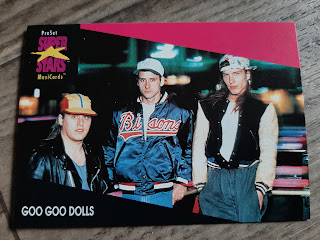 Goo Goo Dolls was a band I couldn't stand in the 90's, but now I rock to. I actually bought a Greatest Hits CD within the last year. And yes, some people buy CD's still :)
Some of my favorite songs by the Goo Goo Dolls are Iris, Slide, Black Balloon, Come To Me,Sympathy, Name, and by far my favorite song of theirs in Better Days. Better Days is a song we should all listen to. 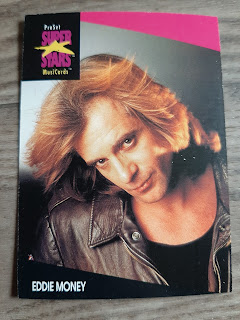 Eddie Money just like the other artists on here had plenty of hits but none caught me like Take Me Home Tonight and especially I Wanna Go Back. Because I wanna go back and do it all over, but I can't go back I know. 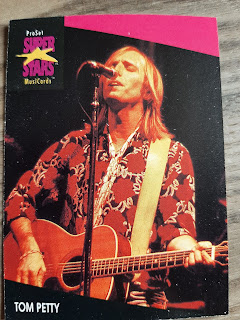 And finally Tom Petty. Once again plenty of hits but none I liked more than Last Dance With MaryJane. I know the song probably relates to drug use but I ignore that part and use the song in my mind as a girl named MaryJane and his last dance with her. It's Good To Be King was another song I enjoyed.
Thanks goes out to @jrl1828x8 for the mail day. I really appreciate it.
*takes a sip before finishing up today's post*
I need to write down which numbers I am missing in this set and seek help in finishing it now. I would be interested in hearing your favorite songs from any of the artists I featured here today.
By the way, if you are curious what I am listening to as I blog today, it's a Pandora station on my phone from 1993. Songs like All That She Wants, In The Still Of The Nite, How Do You Talk To An Angel, and Have I Told You Lately.
*time for breakfast and another cup of coffee, Coffee Card Blogger Out*
Posted by Matt at 7:55 AM