*sits down with morning cup of coffee, turns on some tunes (currently playing Eddie Money I Wanna Go Back) and gets ready for today's latest post. Also realizes we are going back today with this pack rip. Good timing on music*

I would go back to the 90's in a heartbeat and live that all over again. If only one of us with all of today's technology could create a time machine or DeLorean that gives us that experience. It's not something I ever expect, so the only time machine that I have is my mind, music and cardboard.
My buddy Oren, sent me along a 90's pack the last time we traded and I finally had time to sit down to post about it. Unlike my quicker Coffee Break posts, I like to take my time with my 90's cards and savor the nostalgia a bit longer. 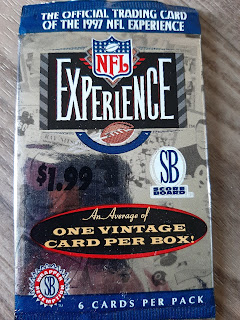 The pack he grabbed me was a 1997 Scoreboard NFL Experience. Back in the 90's it appears these packs cost $1.99 with 6 cards per pack. I don't remembering opening up more than a couple of packs back then, but didn't really recollect the product well.
With any 90's product in the 1995-1999 era, my favorite time in the hobby, my hope is always to see those players I enjoyed watching and of course hitting an insert.
There is only one way to do that, time to open up this pack.
*takes a sip, begins to rip*
A little background on this set before I start showing off the cards. There are 100 cards in the base set without a rookie card in those 100 cards. It's all vets in here. 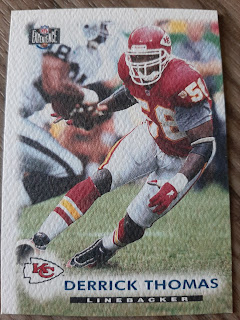 My first card is of Hall Of Fame sack master Derrick Thomas who holds the NFL record for most sacks in a game with 7 and played all 11 years of his career with the Chiefs. Thomas passed in 2000 from a blood clot after a bad car accident. A life taken too quickly. 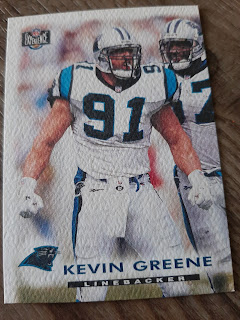 Second card, another Hall Of Famer, was linebacker Kevin Greene who is another life taken too quickly. Greene was a multi-time Pro Bowler, 100 Sack club member and a Super Bowl champion. 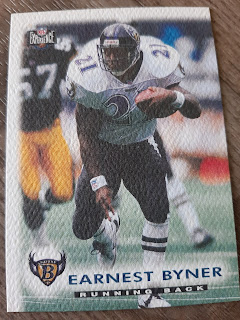 Up next, Earnest Byner. Byner was a 2x Super Bowl champion, played for four teams with the Ravens being his last stop, 2x Pro Bowler and has been a long time coach on multiple teams.
I would also like to point out the old Ravens logo, something I dearly enjoy still. I actually like it more than their current one (would like to hear your thoughts on this in comments). 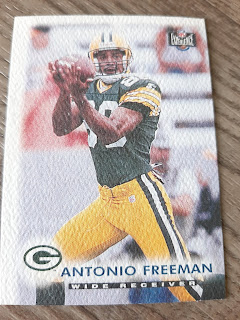 Antonio Freeman was my next card and is remembered most for his time with the Packers. He was a Super Bowl champion and Pro Bowler. He also has one of the greatest catches in Monday Night Football history back in 2000 when he dove for a ball that bounced on every body part possible while he was on the ground and managed to make the catch, jump to his feet and score the winning touchdown. 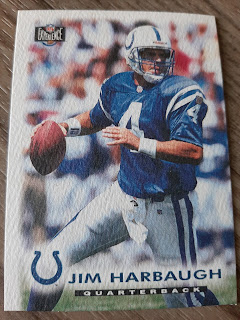 Jim Harbaugh is a better coach then he was player. He won NFL Coach of the Year in 2011.  He went to multiple NFC Championships as coach of the SF 49ers and led them to a Super Bowl against his brother which he ended up losing in.
My final card...well..an insert!!!! 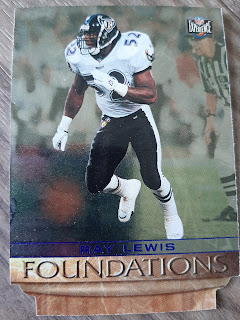 Falling 1:12 odds, Foundations was a pleasant surprise of Raven's great Ray Lewis. Lewis is a Hall Of Fame linebacker who played all 17 years of his career with the Ravens. He was a 2x Super Bowl Champ, Super Bowl MVP, 13x Pro Bowler, and owns multiple NFL Records.
Not a bad pull, though I preferred landing the Amani Toomer version which I will have to add to my needs list. You can locate my needs list HERE.
Thanks again to Oren for this thrilling pack.
*takes a sip before finishing up today's post*
Simple pack openings like this one just brings me back to a great time in my life. Memories I won't ever let go of and music also keeps me there.
Thanks for checking out today's Cards Over Coffee post. I hope you had a great cup of coffee and maybe even turned some tunes on to read it with.
*Coffee Card Blogger Out*
I wanna go back
And do it all over
But I can't go back I know
I wanna go back (go back)
'Cause I'm feeling so much older
But I can't go back I know
Posted by Matt at 3:00 AM