*it's time for a cup of coffee and some cards. Which means it's time for a new post of Cards Over Coffee*
One thing I have learned during the pandemic, other than that there is a lot of greed in the hobby and in the world, is that was finally time to appreciate the little things in life and in the hobby.
Things that I used to take for granted such as family and family get togethers, were things you became accustomed to, but didn't realize how deeply important they were until the pandemic.  There are some close parts of my family I haven't seen since Christmas of 2019 and it starts to get to you after awhile. You start to think, "why did I pretend to fall asleep during game night?" or "why didn't I go out to eat with them when they invited me?" Or "why didn't I push myself to stay up later those few extra hours to spend even more time with them instead of going to bed?" The answer is, I always thought it would be there next time.
During the pandemic, it was starting to get worrisome that there may not be a next time. I should have done those things at "those times" and taken advantage of every moment. As vaccines have started rolling out, I have my appointment set up for May 1st to get my first shot of Moderna, I feel like I may have those times again and this time you better believe I will soak in every second of it. Time to be that weird uncle who gives out the long hugs.
I not only find myself questioning little things in life such as above, but little things in the hobby as well. Something such as simple as following @CardsFromTheAttic.
*takes a sip, continues on*
When I first started following @CardsFromTheAttic years ago, some of his tweets felt like an attack on the blogging community and I couldn't have that. We are a close family in the blogosphere and I couldn't simply deal with someone who felt the way they did about us. So I unfollowed him and he followed suit later on as well and I went on with my Twitter life.
Fast forward to last summer, I started seeing some tweets from him being re-tweeted from others I followed. I then began to ask myself if I misread him years ago and gave him another follow. Come to find out, he is actually a good guy and his tweets I felt were attacks were actually apart of his personality and humor. You have to be a funny person, such as I consider myself to be, to fully get his humor.
Since I have re-followed him, I have joined in on some of his banter and enjoyed his content such as the March Madness Tournament in #CardboardChaos. Even though every brand I voted on, the late 90's ones, never made it too far.
Another thing you find out fast about him is his love of yellow in 1991 Fleer. He bleeds yellow. He screams yellow. He tweets yellow. Probably even has yellow socks and sandals on while he tweets. (The last part of that you would have to follow him to understand that sort of inside joke)
I questioned myself again about 1991 Fleer and maybe I missed something. Maybe I should give it another look and another chance just like I did in following @CardsFromTheAttic again. Come to find out, I did miss something in 1991 Fleer and it wasn't anything that Coldplay sang about.
*takes another sip, finds a snack to tie over before breakfast*
My favorite part of 1991 Fleer was staring at me the whole time and it was something with a black border, not yellow. Something that really stood out that I would have turned a blind eye to before. It was the Pro-Visions insert.
The 12-card insert set featured paintings by artist Terry Smith and featured "framed" black borders on each card front. The cards were randomly inserted in wax and rack packs to find. All I know is when I did open up some '91 Fleer "back in the day" is that I never once landed one of those inserts. I think they must be a little tough to find. 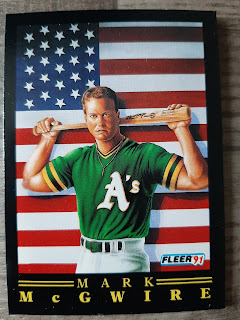 I am not sure how I didn't pay any attention to these before, but God Bless America that I am now.
And thanks to @CardsFromTheAttic, I have the entire set. 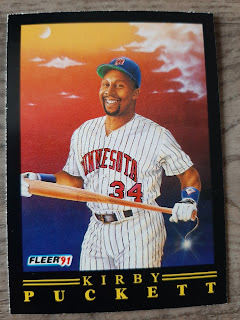 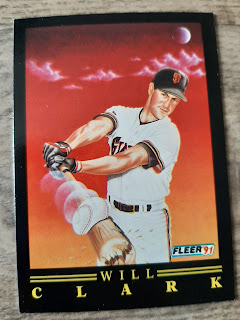 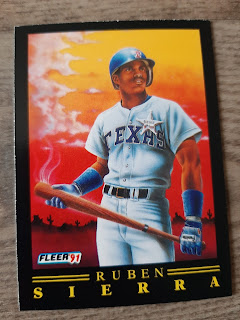 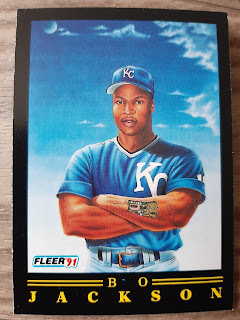 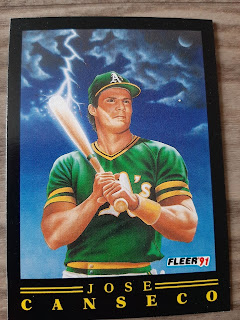 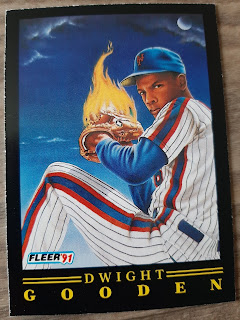 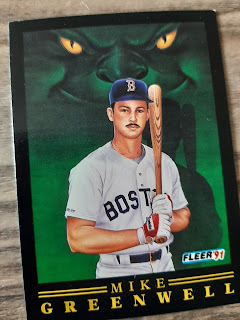 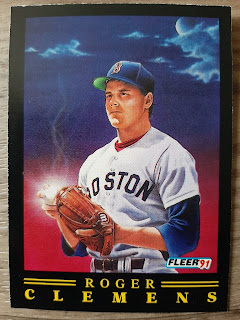 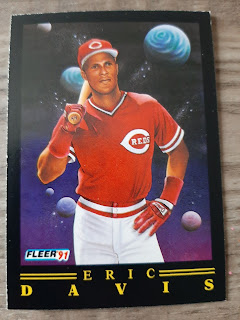 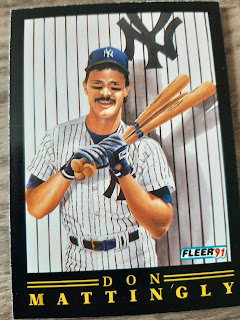 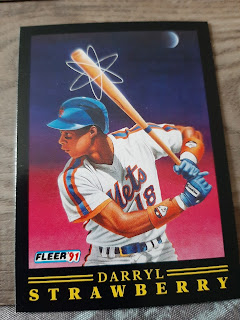 The artwork along with the black border really makes these stand out. I do wished that Griffey had been included, but it still doesn't disappoint.
Along with this full set, he also sent along some extras, 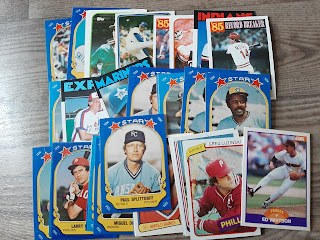 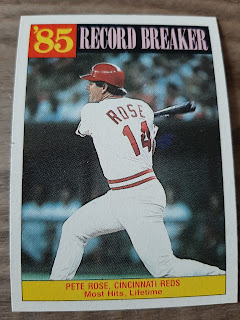 some of which I hadn't seen before including this Pete Rose.
Thanks goes out to @CardsFromTheAttic for the mail day and for the reminder that not everything about 1991 Fleer was bad.
*takes another sip before closing up today's post*
Whether it's family or something as simple as 1991 Fleer, I am no longer taking anything for granted. That includes waking up each day or even that cup of coffee in the morning (and of course the ones at noon and night as well). You just never know that day where it may not happen so take advantage of every second you are breathing.
*hope everyone enjoys a fresh cup of coffee today with this post and I hope you all have a great day as well. Coffee card blogger out*
Posted by Matt at 8:03 AM