*takes a seat after finishing up some chores, decides this cold cloudy/rainy morning is a perfect time for another #CardsOverCoffee post*
I consider myself a Ken Griffey Jr closet collector. It used to be more known that I was one of the "Griffey Guys" but as I continue to add more football cards to my collection and downsize my baseball, my Griffey collecting has taken a backseat as well.
But, that doesn't mean I have completely given up on collecting Griffey as he still remains the biggest player PC I have with over 1,000 different cards, but it's just not a main focus. I do add some with my trades with Shane (Cheap Wax Wednesday) and occasionally will add some if I see any I need up for trade on Twitter.
Then there are the rare times where I will actually buy one now. That is what today's card is all about.
*takes a sip, looks over at the latest Griffey addition next to the coffee mug*
For some reason or another, I have been all over getting cards with athletes and some form of superheroes on them. There will be another post coming up with more of those types of additions. So today's Griffey had a hero of some form on it so I had to have it.
In 1996, Stadium Club produced an insert set called Mega Heroes that fell 1:18 packs. 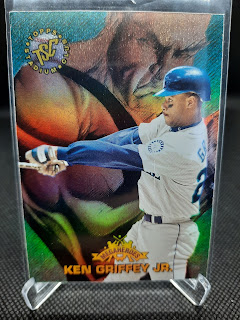 The 10 card set featured a superstar player along with a mega hero. The cards have a rainbow foil front that really glow in the light. Especially a lightbox, see what I did there. 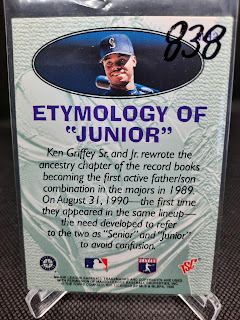 The back of the cards had a small write up and gives the history of the players featured had their nicknames. For Griffey, most call him Junior and that's because when he and his father played together for the first time in a game, it got confusing since they both carry the same name so they had to find a way to separate the names. So they began calling them Senior and Junior. Pretty simple.
This card sells for $5 and up, but being stingy like I have to be, I made an offer and landed it for $3 with free shipping. I got a deal and was happy to add a nice card.
*takes a sip before finishing up today's post*
My Griffey collection will continue to grow as time goes on. I am no hurry to chase them all down, however I would really love the 1998 Skybox Dugout Axcess Superheroes card. Griffey is featured with Spiderman. So if you have one available for trade, hit me up.
Hope everyone has a great Monday. If you enjoy this content, please share with the buttons on social media below this post and add the blog to your blogrolls. Thanks for reading and drink some coffee, it's never too late in the day.
In comments, let's hear if you are a closet collector of any player or team.
*Coffee Card Blogger Out*
Posted by Matt at 1:35 PM