Time To Be Scared

*takes a sip of coffee, didn't know I was out of creamer so had to use my wife's creamer which is intended more for Christmas time and not now. Oh, well, it's still a good cup of coffee. Time to kick off a new month with a new #CardsOverCoffee*
October is known to many as a "scary" month with Halloween coming up at the end of the month. Many celebrate every day like it's Halloween, which is what I did a lot of in my youth. That was because I grew up watching a ton of horror movies with classics like Halloween, Friday The 13th, Child's Play and Nightmare On Elm Street among many others alongside my mom. My mom was a huge horror buff and when I wasn't watching cartoons, we watched Jason cut somebody's head off. Sounds twisted and probably something most would be offended by today, but, don't worry I turned out okay.
As I got older and met my wife, those days of watching horror movies went out the door and October became Halloween Candy month. However, it doesn't mean if a horror movie that I used to watch is on TV, that I won't watch a few minutes of it. As I have always said, I am a nostalgic driven person. So memories of my mother and I watching those together always kicks in.
For the most part though, it's all about the candy.
*takes a sip, now wanting a small KitKat bar...gimme a break, gimme a break....break me off a piece of that KitKat bar!*
One of my favorite Easter Candies is the Cadbury Eggs with the goopy center that resembles a real egg. I have noticed the last few years that they have released a Halloween version known as a Screme Egg with a scary green center. 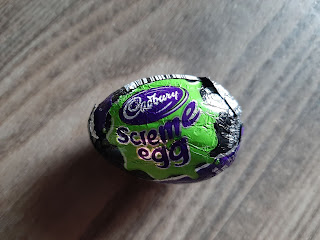 I finally picked one up hoping for something cool and delicious. 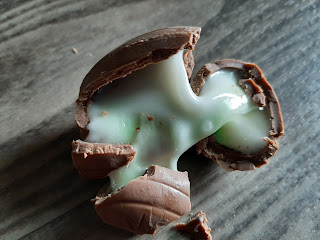 And I was left disappointed. There was one speckle of green and it didn't have the flavor as the Easter version. I expected Slimer to be falling out of this...but it was more of a yolkless egg.
The same day I found the egg to try...look at what else I found, 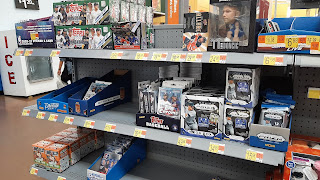 Yes, CARDS! I found cards!!!!
As I got closer though, it got scary and I realized why the cards still remained.
*takes another sip, the peppermint mocha creamer isn't as bad in the fall as I would have thought. preferably though, I rather have this for winter*
There was quite a few boxes on the shelf with baseball, WNBA and hockey on it. I was mainly focused on the Chrome and Prizm baseball. Just like many other collectors, I like my shiny. 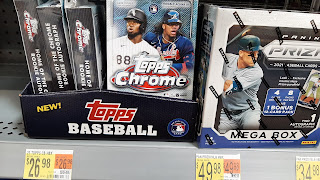 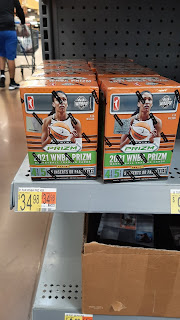 Even a WNBA blaster box of Prizm was $34.98 as I thought, for half a second, about grabbing one just for fun. Not for that price.
Then there was those Topps Complete sets will probably sit there for years as well at a $60 price tag and even the hockey blasters, which I always found hockey on the shelves even jumped to $30 per.
Retail is scary. You might as well leave Michael Myers standing by the section waiting to stab us when we see those prices. We go from not being able to find any at all because of flippers and now the flippers have driven up the price and now don't even want the product anymore. All around the hobby in the past year or so has been a lose-lose when it comes to wanting to open something retail.
Now with Fanatics coming on board soon, is it time to be really scared in the hobby? Not sure, we will have sit back and wait.
*takes a sip before finishing up today's post*
I probably will not be picking up another one of those eggs or retail at those prices. I liked to be scared by horror movies, not by my hobby.
In comments, let me know your thoughts on the pricing increase, if you have tried one of those Screme Eggs and what your favorite Halloween Candy is.
*Coffee Card Blogger Out*
Posted by Matt at 10:13 AM