*takes a seat, has a really hot cup of coffee that burns the roof of the mouth. Good start to the day, but it will get better once I get today's #CardsOverCoffee post completed*
It was Saturday Night in 1992. I was 9 and had just gotten back to my grandmother's apartment after she had taken me out for a round of Bingo where I got to eat snacks my Great Aunt Pearl brought, sip on a cup of coffee my grandmother snuck me and watch elderly women bicker while I won a few games. One of those elderly was sadly my great aunt  Pearl who would take her "wand" that picked up the Bingo chips and throw it across the room when she would lose. Wasn't my fault I won with one card and she lost with twenty-five of them.
The TV would be the first thing I would head to before going to bed at her apartment. My grandmother was the only one in my family with a fancy thing called cable. At home, I was the cable. I would have to go outside in all types of weather and rotate the in ground satellite until it picked up the channel we wanted to watch. So we had all the basics, ABC, NBC, PBS, Fox (this was shocking actually) and CBS whenever I found the "sweet spot".
But, not Nickelodeon. That was a bonus for me on Saturday nights and I had two shows immediately that I loved to watch. Since I was a horror buff, Are You Afraid Of The Dark was a must at 9:30pm but so wasn't Ren And Stimpy at 9. I can't explain why I loved Ren and Stimpy, but I did.
When I saw Jon from the blog A Penny Sleeve For Your Thoughts post some sticker cards from the show I had forgotten existed, I knew I needed some for my collection before I forgot about them again. So I hunted down a really cheap lot for $7.
*takes a sip before moving on*
In 1994 Topps created The Ren and Stimpy All Prismatic 50 card set. There was a bunch of variations in that would make today's Topps baseball Sp's easy to spot. Most cards had 3 or 4 variations.
So excuse me if I don't know or can spot them below. I am just showing off what I scored in the lot. 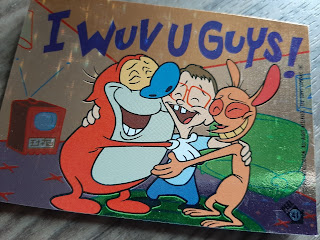 (how I feel about you guys) 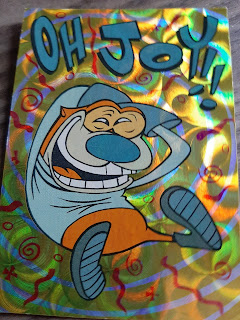 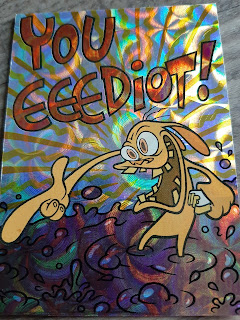 (how retail flippers make me feel) 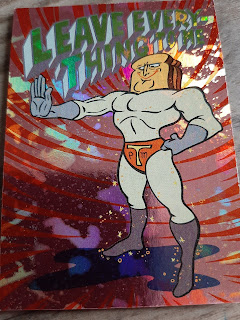 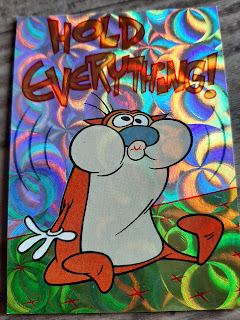 (who doesn't at least know this song?!) 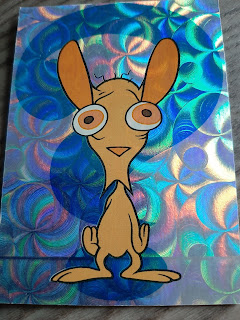 Looking at prices for these, it appears I may had gotten a little bit of a deal. This also wasn't all of them either. There were others and some duplicates which I hoarded anyways. I believe the lot was 40 sticker cards.
Thanks for the reminder on these Jon! They will go well with my Comic Books and my Stuffed Stimpy.
*takes a sip before finishing up today's post*
Today's post was a nice step back in time. A time when things were simpler in life and a time when my grandmother was around. She was always someone I looked up to and modeled myself after.I will always remember the fun I had at Bingo with her and of course my unforgettable Great Aunt Pearl who has also passed since.
I have watched Ren and Stimpy again recently on TV and even though it didn't quite have the impact on me it did when I was 9, I still enjoyed it mainly for the nostalgic piece.
In comments today, let me know what SNICK show you watched? If you were ever your own "cable" and if you were a Ren and Stimpy Fan.
*Coffee Card Blogger Out* 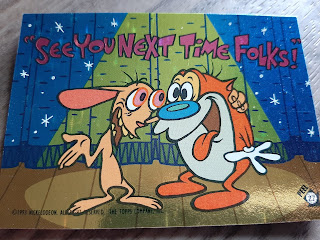 Email ThisBlogThis!Share to TwitterShare to FacebookShare to Pinterest
Labels: 2021, 90's Cards, A Penny Sleeve For Your Thoughts, Prism Cards, Ren And Stimpy