*its a dreary Monday morning where I am but the sun has got to be shining somewhere right? Or does everyone's Monday always look like this. despite the weather, I still have my coffee, a card to show off and a NY Giants victory to celebrate*
It was 21-10 Saints halfway through the 4th quarter of yesterday's game against my Giants and the Saints had the ball. I was about ready to grab a paper bag out from underneath the sink and cut eye holes out of it and draw a sad face to watch the rest of the season with as it appeared the Giants were heading to 0-4 with the Cowboys and Rams up next.
'
But, then something magical happened.
It was like one of those football movies you would go to the theater to watch. The coaches pumped up the players on the sidelines and somehow or another you could feel the momentum shift. The Giants forced the Saints to punt, got the ball and Daniel Jones threw a pass to Saquon Barkley who took it 54 yards for a touchdown. Giants followed that up with a two point conversion on a Jones run. After that, another stop of the Saints and the Giants drove down the field and got a game tying field goal with 30 or so seconds left. Saints got the ball for those final seconds and attempted to thr\w one pass that fell incomplete before deciding they should run out the clock to bring the game to overtime.
Something about the coin toss in overtime made me believe this team was going to win as Jabrill Peppers called heads on the coin toss and yells out after the coin landed on heads,"We Want That Ball, **** Em." Motivational words I suppose. Mine would have been, We Want The Ball, Coffee is ready at home. Let's get this done.
And as the story in a movie would unfold, the Giants drove down the field with the leadership of Daniel Jones and won on a 6 yard TD run by Saquon Barkley who by far had his best game of the season.
Giants 27 Saints 21. There is some hope to this season.
*takes a sip, feeling good for at least one game*
Hope is a great thing. The Giants have given me some for the season for now but with a tough schedule ahead, who knows how long that will last. They have at least redeemed themselves for the time being after two straight games of disappointing endings.
The hobby has also given me some hope recently as well as I have been able to find retail almost every time at Walmart now and was able to finally get my redemption cards replaced from Panini I have waited months on. I requested my replacements in November of 2020.
I am not one to wait on redemptions longer than the four months unless it's something I really want. Since the three I needed to replace were not something I desperately wanted, I took the replacement on a Robert Woods rookie autograph, a Cody Bellinger second year autograph and a /10 Barry Larkin autograph. In return, I requested to get a NY Giants card instead....
Think I did pretty well, 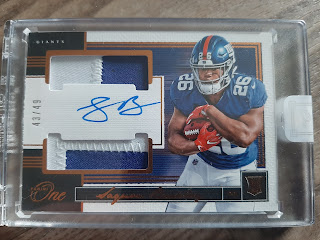 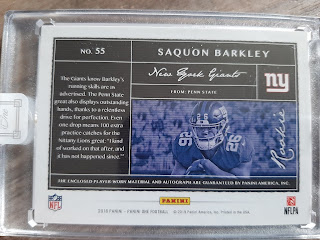 A 2018 Panini One rookie patch autograph of Saquon Barkley. Would say that it's at least equal value then add on the PC part and it's over the value.
*takes a sip before finishing up today's post*
Great game and great card.
All I can hope is that the Giants can continue to trend upwards and hopefully I will continue to find more cards at retail. Just wished they were the original retail price. The only thing worse would be knowing that each retail box had a redemption for your "hit".
*takes another sip*
Tell me your best redemption replacement, thoughts on my return and how your NFL team did yesterday in comments below!
*Coffee Card Blogger Out*
Posted by Matt at 10:30 AM