*sits down to take a sip of Wednesday morning coffee. It's been quite the last few weeks in my household with many different things popping up, so having a nice cup of coffee before diving back into the hectic life is nice. That, and a new #CardsOverCoffee post*
I have mentioned it on here before, but I am a big Batman fan. He is pretty much the only superhero I really watch when it comes to TV and movies.
That doesn't mean if a non Batman movie or show is on TV, I wouldn't watch it. I am still a bit of a nerd and I really do enjoy the classic TV shows like The Incredible Hulk. Back before they made him all computer animated which I can't stand.
When it comes to cardboard, other than putting a bigger focus on Batman, I will pretty much collect anything that involves superheroes. Especially when they are combined with athletes on a card.
*takes a sip before continuing on*
Back in 1997, Skybox Metal Universe came out with a set that combined both NFL players and Marvel heroes in its Marvel Metal insert. These inserts fell 1:6 packs. 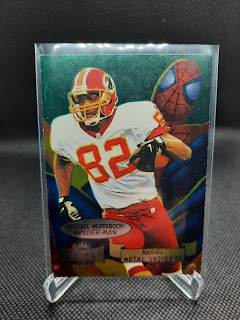 There are 20 cards on the checklist that feature some super and non superstar players with their inner Marvel comparison. 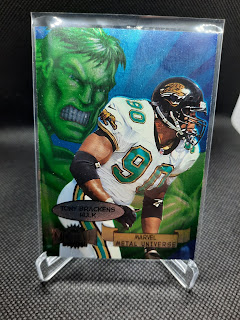 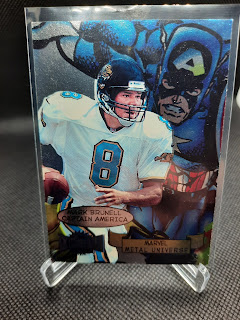 A lot of the better players on the checklist go for $20 plus to land so the odds of me trying to build this set would not be easy, though I would love to.
If any of you have any I don't have, I also have Kerry Collins and Terry Glenn, let me know. Always up for a good trade!
*takes a sip, starts to wonder what breakfast would be this morning*
I know if I had an inner Marvel character it would be the Incredible Hulk. Why? Well, if I don't have my coffee, I would probably turn green and start breaking things.
So in comments, your thoughts on these cards, your inner Marvel character and why are welcomed.
Have a good Wednesday.
*Coffee Card Blogger Out*
Posted by Matt at 9:24 AM