*a surprising warm streak in October the last few days with temps up in the 70's has me feeling better about winter not showing up out of nowhere. takes a sip, gets ready for a new #CardsOverCoffee*
I always see many tweets, Facebook posts and even a few blog posts that brag about local "celebrities". So I sat down to think, do any actually exist here? I know none are from my home or current town but in a short distance there are two that come to mind. Actor Luis Guzman who lives roughly 13 minutes from me and Basketball player Taylor Coppenrath who went to my rival high school 20 minutes away.
I thought it would be fun to add some cardboard of them like everyone seems to do with their local celebrities. Unlike others however, my search wasn't as easy.
*takes a sip*
Guzman has been acting for over 40 years and has been in many movies and television shows, but as far as I can see, doesn't have any cardboard which is surprising being someone who has been in Hollywood as long as he has. Maybe Leaf needs to be contacted about including him in Pop Century.
Taylor Coppenrath played basketball on my rival high schools team, went to college at UVM where he won multiple awards, went undrafted in the NBA but made it onto the Boston Celtics summer league for one season before taking a European contract to play basketball overseas. He currently moved back and is coaching high school basketball. Coppenrath does have a handful of trading cards out there from Press Pass, but not easily found. I did scrounge a few together though from a my last Burbank Sportcards order.
*takes a sip before eating a brownie bite that just happened to be sitting next to me, takes another sip another bite and now onto showing off the cards*
Coppenrath was included into 2005 Press Pass and has roughly 11 cards out there according to Trading Card Database. 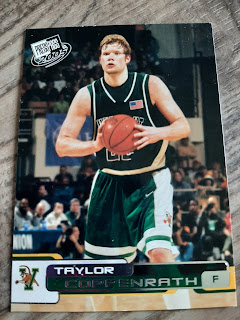 I picked up the base card. 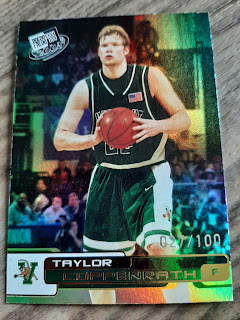 The gold holofoil which is numbered to 100 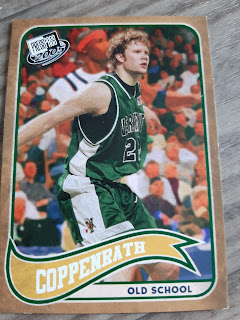 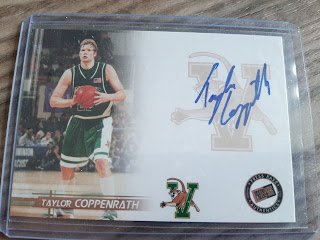 And one of the four autograph cards he has.
It's a small collection but I am happy with what I have. If I happen to stumble upon anymore I may add to it.
*takes a sip before finishing up today's post*
A couple-not-so-local celebrities that comes to mind for the state as well is Jim Cantore (the face of the Weather Channel who needs a Allen Ginter card) and wide receiver David Ball. Ball, broke Jerry Rice's Division 1-AA record for touchdown receptions when he played for UNH and later closed in on a couple others as well before being overtaken by Cooper Kupp for those. But, Ball still remains close to the top in most categories but never made an NFL roster other than preseason games for the Bears and Jets. That's still pretty cool though. Ball has cards in multiple Donruss/Playoff products and Sage and I look forward to actually adding at least one.
I may also have to tag Brian Gray from Leaf on Twitter and try to put a push for a Luis Guzman card for Pop Century. That would be a fun addition to my collection especially a signed one.
*takes another sip and another brownie bite. breakfast at its finest*
So I am curious, what local celebrities do you have? Have you seen any movies with Luis Guzman? Every heard of Taylor Coppenrath? David Ball? Must know Jim Cantore? Tell me in comments!
*Coffee Card Blogger Out*
Posted by Matt at 11:35 AM