*takes a sip feeling nostalgic once again today. 90's inserts do that to me every time I land any or pick any up. takes another sip and gets ready to show off today's #CardsOverCoffee post*
The definition of Fusion is the process or result of joining two or more things together to form a single entity.
Some examples I can think of when two things become one, other than the Spice Girls song, is marriage which joins you and your wife as one. Coffee and myself which makes me move, because without it I would be a bump on a log. And then an insert line from Stadium Club that took two players from a team, put them on separate cards and when you landed both versions they fused into one.
*takes a sip before moving on with today's post. would you consider my coffee an infusion with every sip?*
I bought a ton of 90's Stadium Club from all sports especially between they years of 1995-1999. I remember going into the local pharmacy, Brooks Pharmacy, with my father and grabbing packs that were located up front next to the travel medications. I guess that's just in case you got a headache from landing a nice pull and shouting loudly about it.
I pulled a few fun cards, but never the 1:24 packs Fusion insert. Instead, I had to wait close 20 years and buy a few instead since the prices were much higher back then. Of course I couldn't do it without buying a fused set.
Since there were not any NY Giants in the Fusion set, which is Topps loss, I searched for the cheapest combo I could that would fit my collection. 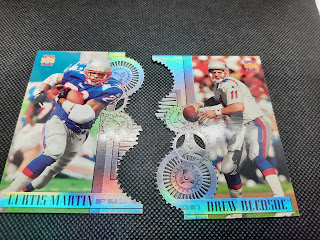 So I chose Curtis Martin (side PC) who is paired with Drew Bledsoe. The design is a wonky gear, but I totally get that they run off from each other so you need both parts. 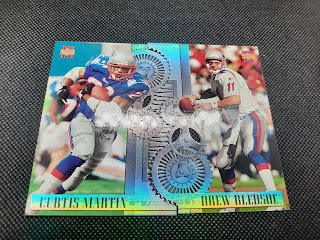 Now cue the Spice Girls....two become one.
*takes another sip. tummy wants some breakfast*
I was happy with owning just the two football ones and to say I finally had some for my 90's collection. But, then I saw a basketball version that actually had a team with my interests. 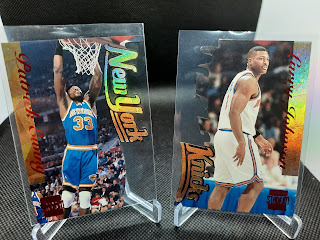 I would have preferred Patrick Ewing and Allan Houston, but this is still a solid combo. This design is much more unique than the football one. A team name being fused is pretty darn cool. 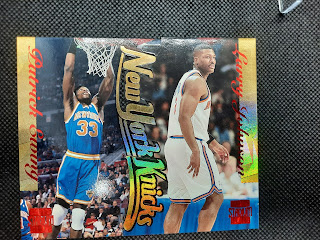 Once again, cue the spice girls...two become one!
I loved watching the NBA in the 90's, especially my Knicks. Speaking of the Knicks, how about those 2021 Knicks so far!! At least one New York team can hopefully bring me some excitement.
*takes a sip fusing myself with coffee*
I may have to chase a few more of these, would look pretty cool having a few teams fused together laid out. It's just too bad that Topps never brought this concept to baseball or even back. They are condition sensitive however as you would imagine with the side corners it has.
In comments today, let's hear your thoughts on the Fusion cards, if you own or have pulled any or have any for trade :)
*Coffee Card Blogger Out*
Posted by Matt at 9:06 AM