*takes a sip, sits down to put up the final post with the old way of posting pictures then on with the new lightbox photos. takes another sip, it's time for some #CardsOverCoffee*
For the last three years, I have been trying to collect one autograph of every NY Giants player and coach. Whether that be someone who only made it through training camp, preseason, a few years or became a legend. I want at least one of them. They do however have to be in a Giants uniform preferably but I also accept college ones.
One of the bigger glaring names on my list was a Hall Of Famer known to play both offense and defense. That guy, Frank Gifford.
*takes another sip, gets ready to show the card off*
For someone who is a Hall Of Famer, made the Pro Bowl 8 times, went to 5 NFL Championships, was an MVP, stayed with one team his whole career and then played multiple positions on offense and defense, his cards and autographs are not to hard to acquire with a good portion being found under $30. 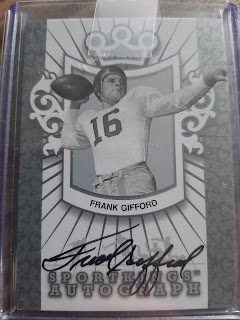 The best one I found was a Sportkings auto under that price. You cannot go wrong finding a player of this caliber under $30 who also has a great signature. 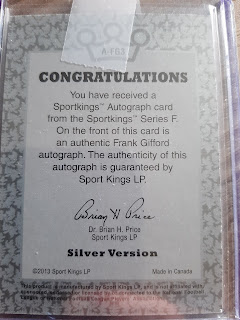 Back of the card doesn't have much to it.
*takes a sip before finishing up today's post*
Gifford sadly passed away in 2015 at the age of 84.
When it comes to his career, I never got to watch any games that he played in. I am too much of a youngin'. I do need to find some older footage on him to watch sometime. I did however see a good portion of his wife, Kathie Lee who was co-host of the talk show Live! with Regis and Kathie Lee
Let's hear your favorite moments of Frank Gifford and let me know your thoughts on finding affordable HOFer autographs.
*Coffee Card Blogger Out*
Posted by Matt at 8:46 AM