*it's early but coffee is in order. When isn't it? Takes a sip, gets ready for another new #CardsOverCoffee. You know you want it!*
On August 29th, 2021 we lost a legend on the big screen in Ed Asner who passed away at the age of 91.
Even though most remember him as Lou Grant on the Mary Tyler Show and the spinoff Lou Grant, I remember him more in other films and television spots. Some of those are his voice acting of Roland Daggett in Batman The Animated Series, Christmas Vacation 2, Elf (he made a great Santa) and of course the award winning Up.
But, he was in so much more.
*takes a sip, remembering watching him on Elf as Santa and realizing we aren't too far from watching that again*
He had been an autograph need on my list for a few years and I waited a little too long since he had passed which drives up prices, but I paid because I still wanted it. 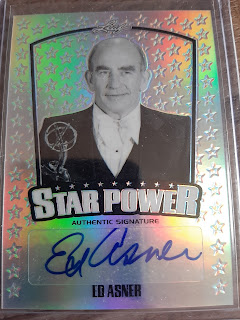 He has a nice signature, 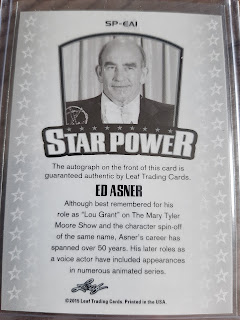 Also happy that Leaf added a write up on the back for him.
*takes a sip before finishing up today's post*
Nostalgia is always a driving point for my non sport pickups, Ed falls under that category for some of his roles.
One thing I haven't mentioned yet about Ed Asner was that he came locally a few years ago and did a one man show my mother-in-law went to go see. She was also able to snap a few photos of him during his act, one of which she gave to me but I forgot to include in this post. I found that pretty cool as well. I pushed for her to grab an autograph as well but guess he didn't do any signing afterwards.
Thanks again for the memories Ed and RIP.
In comments below, tell me your favorite Ed Asner movie or TV appearance!
*Coffee Card Blogger Out*
Posted by Matt at 2:00 AM