*takes a seat with laptop, coffee and card in hand. some would call me a moron for how I carried these to the table. I know Murray Goldberg would*
Every year when Allen and Ginter comes out, I always find a non sport person in the product that has some connection to me one way or another. For example in 2020, it was RL Stine who I used to read in my youth. So I went and chased down a few base, parallels, relic and autograph card.
This year, my subject of choice is Jeff Garlin who portrays Murray Goldberg on The Goldbergs.
*takes a sip. thinking a sugar boost will help this morning but don't want to be too much of a moron and eat a whoopie pie yet*
I have watched The Goldbergs since the show began on ABC in 2013. I enjoy how the show brings nostalgia from the 80's, comedy and family all together in one crazy half hour. Murray is the father in the Goldberg household.
Murray's character seems to often go along with whatever his wife Beverly says, despite not listening to a thing she is rambling on about. It sometimes puts himself into some awkward spots. He is also depicted to be strict and tough on his children, such as calling them morons when they mess up, but deep down, he loves them way too much. Tough love can be the best kind of love and it teaches the best lessons in life. Life isn't easy.
Murray is also known to sit in his favorite chair in his tighty whities in front of the TV regardless of who shows up to his house. Sounds like the life to me. He is just missing the coffee.
*takes another sip*
I haven't had much luck in landing the autograph of Garlin yet, but I was fortunate I found a trader on Twitter who was unloading the relic. 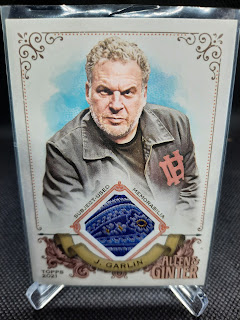 A big thanks to @chefsmith04 for trading me this relic and helping me knock down another one of my needs. This trade was not a moronic move for me.
I also see that Garlin also starred in Mad About You for a couple of seasons, I don't remember that but I did enjoy the show.
*takes a sip before finishing up today's post*
I can't say that in life I haven't done some moronic things or I would be lying. I may have even done a few of those things while typing for this blog (don't put too much butter on your bagel and take a bite while you are typing to).
As for a father, I think I would have been happy to have had a dad like Murray.
In comments today, let me know if you watch The Goldbergs or what you have seen Garlin on and what the most moronic thing you have done. Also, if you have a Garlin auto from Allen Ginter, hit me up for a trade immediately!
*Coffee Card Blogger Out*
Posted by Matt at 9:31 AM