*takes a victorious sip on this victory Monday. The Giants season may not be turning out as I had hoped, but at least there is some hope. takes another sip, coffee tastes even better when the Giants win*
1-5 is where the Giants sat yesterday before kickoff against the Carolina Panthers. They had two heartbreaking losses to the Falcons and WFT before coming back to beat the Saints which is where I thought the season would turn around. But no. Two back-to-back blowout losses to the Cowboys and Rams and a injury list longer than my Christmas list and things were getting ugly fast.
The one sport I actually watch and my team I am die hard for was going down the tube early. I needed a distraction and when I need a distraction, I turn to cardboard.....and coffee. Not alcohol like most fans though that probably eases the pain sooner.
*takes another sip before showing off the latest additions*
This time for my distraction, I went to Burbank Sportcards Beckett Marketplace to hope to calm the storm in my head. I looked for pieces that I knew would make me smile. 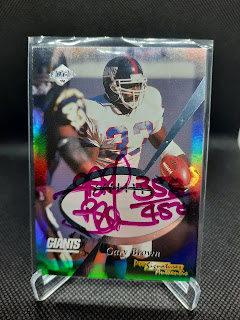 Such as this Gary Brown Collectors Edge autograph. My second autograph of brown, but I am digging the purple ink and hand numbering on this one. I didn't know they used colored ink in the 90's.
Brown played two season with the Gmen and is currently running backs coach in Wisconsin. 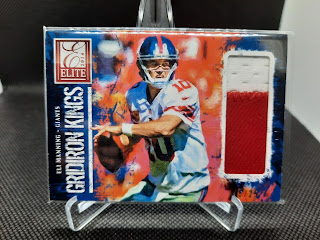 Eli Manning Donruss Elite Gridiron Kings Patch /25.
As most know, I am a huge Eli fan. It's nice to see him do commentary on Monday Night football, especially when he discussed how Eagles fans used to greet him :) 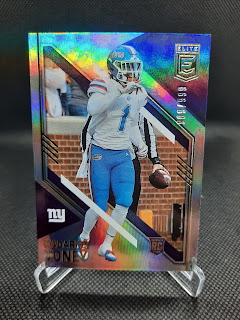 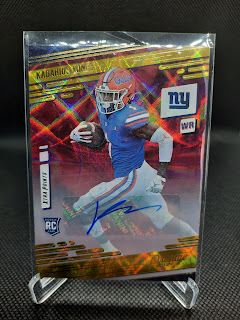 And finally a Prestige rookie autograph gold of Kadarius Toney who is turning into one of my favorite current Giants players every time he is on the field.....and not injured.
*takes a sip before finishing up today's post*
These cards had arrived prior to yesterday's game so I was already feeling good before kickoff. But, I felt even better when yesterdays game ended and the Giants came out on top 25-3. It was probably the best overall performance by the team in years.
The question now is, was yesterday's game a turning point or just a fluke. Next week is Kansas City on Monday Night football on the road. If, IF, they can pull out a win there, maybe things can be turned around and get better. If not and it turns out really bad, well, may need another cardboard and coffee pick-me-up.
Hope everyone has a great Monday. and in comments, let me know what you do when your team is letting you down. Do you go to cardboard? Alcohol? Shutting your TV off?
*Coffee Card Blogger Out*
Posted by Matt at 9:44 AM