*takes a sip, sits down to reminisce about today's Coffee "guest" then gets ready to type about it*
Today's guest is Alan Thicke who sadly passed away in 2016.
If you grew up in the late 80's and early 90's, most likely you grew up with the Seaver family.

Growing Pains focused on Jason (Thicke) and Mary Seaver and their raising of their kids and the challenges that parents can face such as drugs, suicide, peer pressure, and alcohol to name a few. But, in the end, if they were together they could face any problems that arose together.
*takes a sip, remembers the theme song to Growing Pains and starts to hum it*
As a lot of my long time readers know, I have been collecting autographs that relate to anything to my childhood and since I was a big fan of Growing Pains I have already added Jeremy Miller who played Ben Seaver and figured it was time to add another. That's when I found out that Thicke had autograph in a Leaf Pop Century product. I expected it to be outrageously expensive being a famous actor who had passed but I found a pretty decent deal under $20 for one and snagged it. 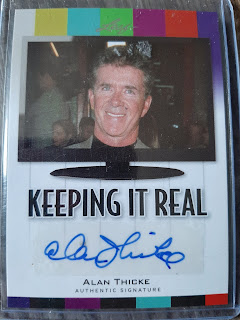 Alan had a solid signature. 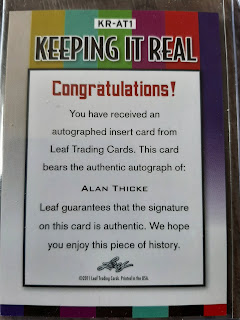 Back of the card is pretty bland. I really wished Leaf would include a picture from their career or anything better than this.
Not only was Alan in Growing Pains, but he also starred in a variety of movies and guest appearances on TV shows. I think the last thing I watched him in was This Is Us. He is father to singer Robin Thicke who is best known for his song Blurred Lines.
*takes a sip before finishing up today's post*
As I was composing today's post, I was thinking as I went along, can you imagine what it would have been like to tackle some of today's issues on the show? I won't dive into the topics as I don't want to start politics in a place only about cards and coffee but I would imagine some of those topics would be pretty hard to handle. Parenting in this day and age cannot be easy or even being a kid for that matter. I am just glad I grew up when I did and that's all I need to say.
*Coffee Card Blogger Out*
Posted by Matt at 3:00 AM