*sits down with a full hot cup of joe in hand and is ready for a new Cards Over Coffee post*
I believe we all have a favorite superhero. Whether that's when we were growing up or now or both. It's probably the one common ground we all have...other than coffee.
I like a few from both from the DC and Marvel universes but none more than the one featured today, my favorite all-time Superhero is Batman.
*takes a sip*
Batman isn't like other superheroes. He wasn't born with some special ability or created in some lab, he is a average person-other than being super wealthy-who uses intellect, high tech gadgets and martial art skills to avenge the loss of his parents by taking crime down.
I can't pinpoint why I chose Batman as my favorite, I think it's a combination of his batsuit and the super cool villains and gadgets. I do know my origins of my Batman frenzy began with the 1989 movie Batman then grew from there. It expanded even more so when Batman Returns released in 1992 followed by Batman The Animated Series which ranks in my Top 5 favorite cartoons all-time.
*takes a sip, gets to the card portion of today's post*
When it comes to collecting Batman, I don't have much in the way of cardboard. I do have a few cards from my wife's uncle who gave me his entire card collection which was mainly non sports. There was one binder which included a few pages of the Topps 1966 Batman card release. 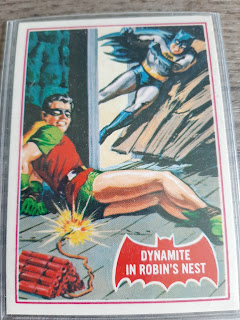 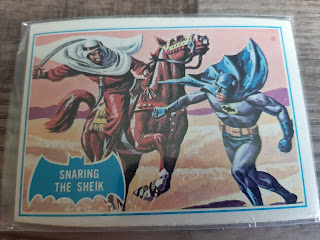 Both of these cards, which were sent by reader Oren, are examples of the design for the cards that year. There were five sets produced by Topps because of the popularity of the show by Adam West and Burt Ward.
Other Batman cards I have, are a few from 1995 Fleer Metal Batman Forever and a couple cards from Stadium Club Batman Returns. I would obviously like to expand my card collection of The Dark Knight.
*takes a sip before closing up today's post*
The original movies, despite how corny Batman Forever and Batman&Robin were, will always have a special place in my Batman world. I never thought they would/could be beaten until I saw Christopher Nolan's take on Batman in The Dark Knight trilogy. I went and saw all three of those films in the theater with my Mother-In-Law. If that alone doesn't show my fandom, nothing else will. Imagine walking into the theaters with someone twice your age, getting snacks together and sitting down next to each other and the kind of looks you get. A little uncomfortable, but I did it for you Batman.
One day my dream would be to add a Burt Ward and Adam West autograph card to the collection. But, for now I hope I can add more of the cheaper cards and sets.
In comments, would like to hear your favorite DC Superhero and which Batman movie was your favorite if you have one.
*takes another sip thinking about breakfast, Coffee Card Blogger Out*
Posted by Matt at 3:00 AM

Email ThisBlogThis!Share to TwitterShare to FacebookShare to Pinterest
Labels: 2021, Batman, Get To Know Your Blogger, Mail Day, Oren, Topps